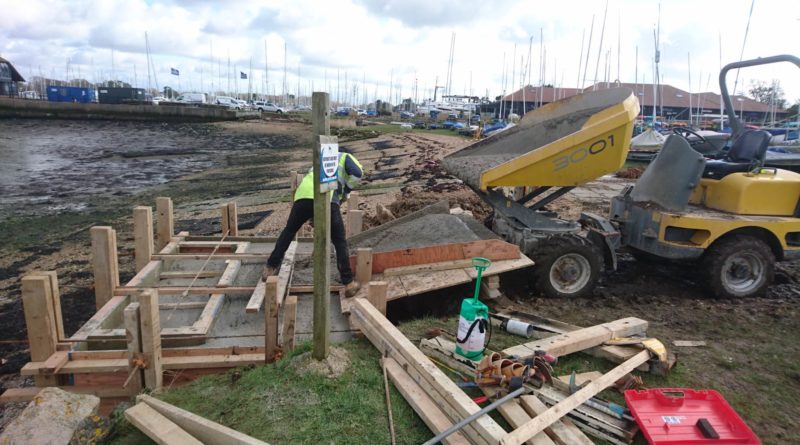 Update on Pontoon Bridge Banks
The team from Walcon have made good progress over the last week and have finished the Eastern concrete bank that will take the East bridge. They have now filled in around the concrete and tidied the beach next to it, so we have a little more space for launching. They also removed the tops of the tank traps to help to make the slipways more user friendly. The next stage is to reinstall the old bridge as this will continue to be in use until the club can afford to buy the new East pontoon, hopefully in 12 months time. We have modified the bridge so that it will fit onto the new bridge bank and it will be far easier to use than before, without the big step up. It has lasted about 40 years and we are hoping we can keep it going for one more.
As for the West bridge bank, a very large hole has been excavated, the shuttering is in and the first load of concrete has been poured. This is going to take about 20 tonnes of concrete by the time it is completed so it is not likely to move even in the strongest of blows.
It is pleasing to be on schedule, especially as the weather has not been kind to us. However, there is going to be a great deal of work tidying the ground as a result of the terrible conditions that they have been working under. We have another week before the RS400 open meeting on the 14th March and our aim is to have everything in a reasonable condition for then, even if it is not perfect. Once they are on the water I am sure they will, as usual, have some great racing.
Chris Hodge

We now have earth moving vehicles on site and good progress has been made on the East bridge bank. The bridges to both pontoons have been removed and stored on the pontoons while the work on the banks is being carried out. The site for the East bridge bank has been excavated and shuttering will soon be built and concrete poured to form the new landing for the bridge. When this was  started three anti-tank concrete blocks left over from the war were found underneath the old structure. These had to be broken up and carted away. It looks like there are several more buried around the excavation, under the grass.

The area of the dinghy park leading to the East pontoon has now been cordoned off as well as the Northern side of the club outside the sloop and the quarter deck. This is for health and safety reasons, so please do not enter this area.

The mid-week working party proved to be a great pontoon moving team in cold, windy but dry conditions removing the retaining chains and ramp from the West pontoon and securing the pontoon with new stakes ropes and chain.