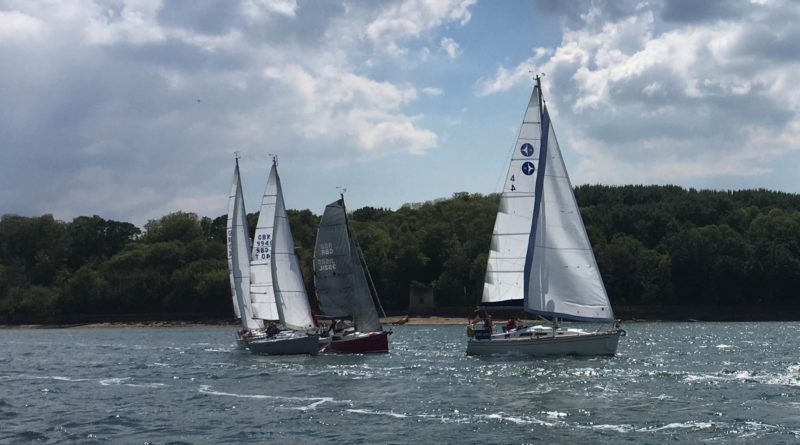 I’m sure I am not alone in feeling a measure of frustration & disappointment at not being able to race to Cowes last weekend. After all, the weather was excellent & though the winds were a bit light, I’m positive it would have been a cracking sail!

Then, on Sunday, Gary O’Grady (Katy) asked on WhatsApp: who won the Peter Buttery Trophy? That set me thinking – though I didn’t do anything until the fine weather broke on Tuesday, when I was stuck in front of my computer. Why not take the entry list for the weekend, & concoct some “fantasy” results for the race?

So, how to go about it? The first thing to say is that, following on from a record level of participation in 2019, this year would have been even more impressive: when I last looked at the Cruise List, there were 20 boats signed up (including the Reserve List) – that would have been something to see on our traditional “rolling start” at Chi Buoy.

For the boats that didn’t have a starting handicap from last season, I looked up the standard NHC value from the RYA list – & that’s what I used.

The next thing was to establish a “benchmark” elapsed time for the wind, tide & start time (1300 hrs) on the day, for which I used my Neptune Plus passage planning software, and that gave a predicted time of 2 hours & 20 minutes for Windreaver, roughly…

So then, how to decide on the elapsed time for all the other competitors? Well, I decided that this year, we had a very competitive field, so every boat was going to finish 3 minutes apart from the boats either side. I tried other differences in the spreadsheet, but this is the one that I liked best.

Finally, how to “model” the fantasy finishing order? Everyone knows that the longer the yacht, the faster it is likely to go – so I tried that first. To be perfectly honest with you all, I just didn’t think that the results looked that realistic. The other bit of received wisdom is that narrow, pointy yachts are likely to be quicker that shorter, tubbier ones, so I calculated the length to beam ratio for all the competitors, & tried that – didn’t like that result either. So, I tried combining the length & the L/B ratio in different ways, finally deciding on the factor in the spreadsheet below.

And one last explanation of results I liked less than others, and an apology to Crayzee Feeling: in an awful lot of the scenarios I modelled, Crayzee Feeling came first (or close to) and I just thought it would be less disheartening to the rest of us if they did not start this season the way they (quite rightly) dominated last season. Sorry Steve!!! They are, after all, my Fantasy Results being presented! Here they are…

Congratulations to Richard Serna on Stormcruiser, but don’t get your hopes up – this was only a fantasy, so I don’t think the trophy will actually be awarded this year – sorry!

And another apology – to John & Jane on First Light. We all know you would not really have been last! This result just tells you that you have been too good over the years, & your handicap has done for you!

The return leg was cancelled, by the way. I couldn’t think of a reasonable way to get a different set of results. These results are Provisional, of course. Get your protests in soon!

Fingers crossed for a return to real sailing before too long,