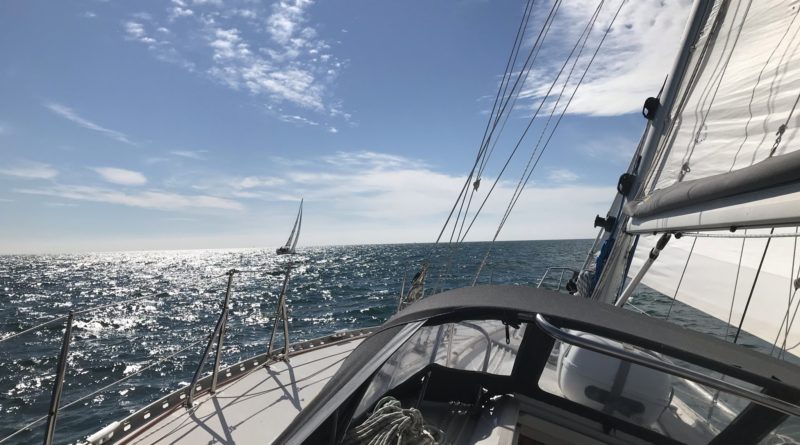 Having been denied our usual blast across the Channel this year, we decided it would be nice to take in the view of the south side of the Isle of Wight on our way to Poole. Ten intrepid boats amassed on the start line…… well actually seven, as three were running a little late, but that was okay. To greet the fleet were two of the rarest things for Solent sailors, firstly sunshine, and secondly an easterly wind!

Encouraged along by these things the boats set off on what was going to be around an eight hour run to Poole. As usual, Cool Runnings quickly disappeared into the middle distance, with Turn IV, Uforia, Windreaver, Katy and Elyse trying to outpace each other and steal each other’s wind. Selene IV had set off a little earlier than the rest and was making good progress.

About the time the fleet was off Bembridge our three remaining boats had finished their morning coffee and made it to the start line. Misty Blue set off in hot pursuit, with Simon flying his ‘big blue pants’ (cruising chute) to great effect whilst Stormcruiser and Kerenza stuck it out under white sails. Kerenza and Stormcruiser soon decided that G&T time was in jeopardy if they did not crack on so decided to abandon racing, with Stormcruiser taking the Solent route and Kerenza motor sailing after the fleet, an excellent tactic as the sight of them approaching rapidly from the rear had the front runners tweaking sails frantically until the ruse was rumbled.

Off St Catherine’s point the wind died for a time and a few impatient souls, myself included, resorted to the iron topsails therefore incurring a time penalty for engine use. The wind soon returned, rewarding us with an almost dead downwind course directly to Poole, the finish and the pub. This dead run led to a number of tactics being deployed to obtain the best VGM, Cool Runnings adopting the ‘Labrador with a stick’ tactic of charging from one side of the course to the other and then back again. On Elyse we deployed the ‘John Lake’ special by goose winging main and cruising cute, an effective but highly unstable affair, whilst Windreaver thought that wrapping the cruising chute around the forestay was the best tactic. All the time Misty Blue, with Simon’s big blue pants flying merrily in the wind starting picking us off one by one.

On arrival in Poole the boats merrily moored up assisted by the crews of those already docked. I had my hopes dashed to discover that most of the fleet had stuck it out under sail and not resorted to motoring when the wind died.

The next morning, fully rested, the crews took to exploring Poole in the sun. That evening we had our first pontoon party of the season where the results were announced. Misty Blue had managed to beat us all on handicap by a whopping 24mins! The rest of the boats were closely bunched with Turn IV in second and Elyse in 3rd, there was then only one second between Uforia in 4th and Cool Runnings in 5th, Windreaver took 6th, Katy 7th and Selene IV 8th.

The group then moved on for a lovely dinner at the Blue Boar where we had our own area with tables of six, of course. Crew from Rascillian and Dawn Chorus, who also happened to be in Poole, joined us for a most enjoyable evening.

It was with a heavy heart that Elyse, Katy, Cool Runnings, Selene IV and Stormcruiser plotted a course eastward (now into the wind!) whilst the rest of the fleet continued westward with John on the RC cruise.