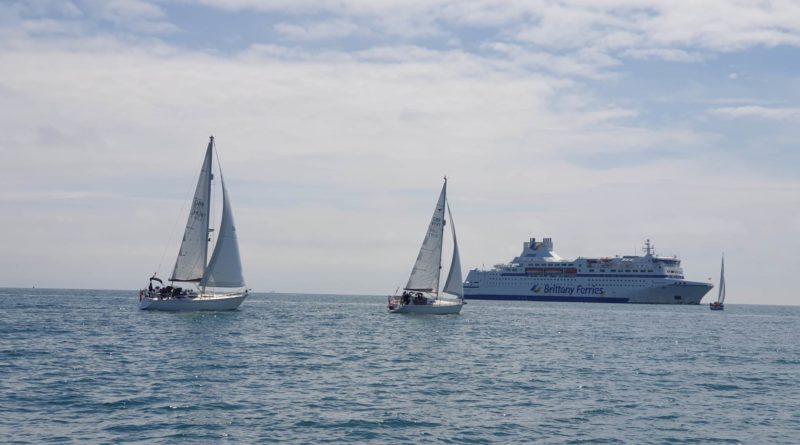 This year’s Peter Buttery Race took on a slightly different guise as our traditional romp to Cowes and back in the spring had to be cancelled due to inclement weather. However an opportunity presented itself to run a day race on the Sunday following the Bramidge Challenge against CCRC. As I had heard tales of a mythical pursuit race once organised by Steve Cray in the mists of history which was, by all reports, great fun, I decided it was time for another go.

A pursuit race is exactly as the name describes; instead of everyone starting at the same time, each boat starts on its own at a given time, depending on their average cruising speed, with the slowest boat first and the fastest last. If I had done my maths correctly (highly unlikely) all of the boats should finish at exactly the same time and much carnage would ensue at the finish line.

The day dawned with little in the way of wind and much in the way of drizzle, and there were many mutinous mutterings amongst the crew of Elyse as we motored out of the harbour. The fleet assembled at Chi buoy to watch Jerry with Kerry Dancer set off stoically into the gloom as our lead boat. Thankfully, the drizzle had stopped by this point, but the wind was yet to commit to the proceedings. Twenty minutes later John with Windreaver set off chasing Jerry who was by now just a small white triangle of sail in the distance. Then came a flurry of boats leaving within one minute of each other as Andrew with Merlot, my semi mutinous crew with Elyse, and the Greenfields with Tern IV all set off, followed a few minutes later by the Crayzee crew with Crayzee Feeling. Cool Runnings, being the prize pony of the fleet, had to wait until last, impatiently tacking back and forth at the start line until Peter could set off in hot pursuit of us all.

The course was a trapezoid around the marks in Hayling Bay.  Starting at Chi then west to Winner, south to St Helen’s, southeast to Nab End then North back to Chi. All in all, just under 10nm.

Jerry, at the front of the fleet, reported that as he approached the first mark the wind had died to 0.0kts and it was only the tide that was helping him towards the mark. Soon enough, the boats just behind ran into the same hole. On Elyse we noticed Tern IV, a mysteriously fast boat, even when there is no wind (?!) ominously approaching us from the rear. We readied buckets of water, should she get too close it would give us a chance to dampen her spirits. Fortunately for her crew, her skipper rumbled our ruse and Martin steered past us just out of range and set off after Windreaver. Meanwhile, Crayzee Feeling, Merlot and Cool Runnings were all approaching the first mark neck and neck. Thankfully, the wind now filled in and gave us a cracking 12kts over the deck which spurred the fleet towards the second mark with the sun breaking through for good measure. Tern IV and their secret propulsion system soon ran down Windreaver and Kerry Dancer to make it to the mark first followed by my, now slightly more cheerful crew, on Elyse. 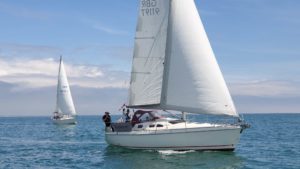 At the second mark, most of the fleet chose to tack immediately whilst on Elyse we decided to head further south and take our chances amongst the moored ships off Bembridge. This tactic, remarkably, worked and we managed to get to the third mark edging into first position with Tern IV and Cool Runnings in hot pursuit.

A tense downwind leg had Elyse and Tern IV side by side all the way to the finish and with both crews doing their utmost to gain the advantage – I have even heard an unsubstantiated rumour that Tern IV were emptying their water tanks to make the boat lighter. In a death or glory manoeuvre, we finally managed to get our bows ahead of them to claim first over the line by dropping the main and sailing dead downwind with chute and genoa goose winged. For us this was a totally untried and somewhat hairy affair where the opportunities for total disaster were numerous.

Meanwhile, Cool Runnings had gained considerably but not quite enough to catch the two lead boats, and the Crayzee crew got to try out Steve’s new spinnaker, and finally confirm what colour it was, whilst being chased by Windreaver and Merlot to the line. Kerry Dancer even got their kite up for the first time and was escorted home by a pod of dolphins.

A fantastic end to a great day out on the water, with Tern IV claiming final victory on a corrected time of 2:28:22 – congratulations to the Greenfields, thank you to all who took part and hope to see everyone back in hot pursuit next year!