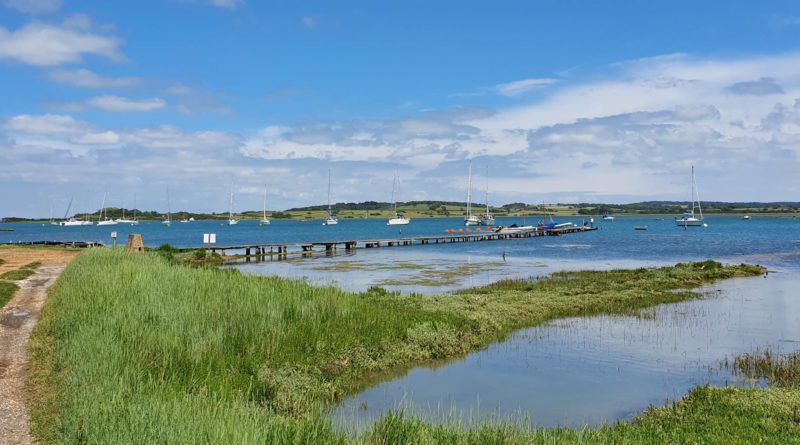 This four-night trip to the Isle of Wight began in Yarmouth (OK, perhaps it should have been titled Best of West and East) after a good sail in increasing westerly winds followed by a drinks gathering in the garden of the Royal Solent Yacht Club.

The next day, after heavy morning rain cleared, 16 cruisers joined a 7.5 mile Newtown river walk in the sun with beautiful views of the river, creek and coastline and more than our fair share of mud. Plenty of bird life, with expert guidance from Kerry Jackson and the mesmerising sight of a seal doing battle to the death with a crab, not the easiest of snacks. Interesting to see crowded Newtown Creek from the shoreline for a change.

The rally dinner that evening was at Italian restaurant Cucina, now becoming a favourite with CYC cruisers, packed with diners but still great service and food.

On Saturday we set sail for Bembridge at the other end of the island where all were berthed on individual pontoon fingers. The planned Rock the Boat music festival on the Duver in aid of the Sophie Rolf Trust charity, for which we had tickets, was cancelled at short notice after Covid restrictions on gatherings were not lifted as hoped on 14th June. But Bembridge owner Malcolm Thorpe generously loaned CYC the barbecues and marquee free of charge that evening on the hard where, in a flower bed, an oystercatcher had nested and laid eggs.

We woke on Sunday to mist and heavy showers, time to get those boat jobs done or maybe take a walk. Arcadia and April Folly went to Seaview YC for coffee and Ursa Minor visited Quarr Abbey near Fishbourne.

On Monday, we strolled along the seafront to the Baywatch Café in the sun to the sound of foghorns out at sea, a wall of fog on the horizon and no wind. First away was Kerry Dancer, keen to get back to work, they crossed in the fog, but it had lifted by the time the last boats left at 1.15pm for a warm and windless journey home.