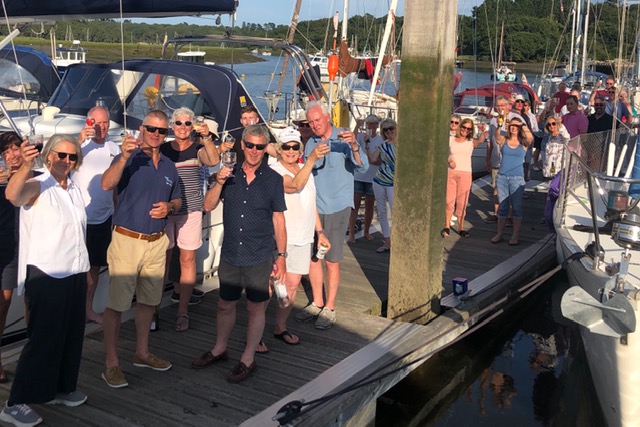 What is it with the weather forecasting? Why can they get so little right?

The closer we got to departure the worse the forecast was getting. Two days before the cruise the forecast improved so the decision was made to go, and thank goodness we did!

Aquadisiac, Cool Runnings, Avalon, Serendipity and Seabird formed the advanced party arriving on Friday after a downwind sail with the tide. Finally, the forecast was accurate, and on Friday night the heavens opened, and it poured down with rain clearing away the humidity. 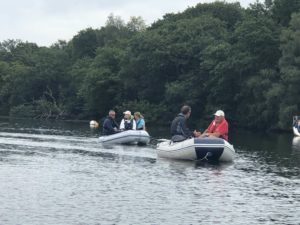 Saturday morning was a slow start with the sun breaking out late morning. Cool Runnings, Serendipity, Avalon and Aquadisiac launched their tenders and explored the Beaulieu River all the way to the village with Beryl Walker on her paddle board. The cruise leader was in danger of being reported to the pollution police due to a blue cloud of smoke coming from his outboard which followed them up the river!  The cruise leader then had to suffer the ignominy of being towed back to the pontoon.

The rest of the cruise started to arrive throughout the afternoon with 20 boats moored on the south visitors’ pontoon. Pell Mell suffered engine problems but, not wishing to miss out, drove to the marina and spent the night on Avalon. I guess that counts as 21 boats!

The sun was now fully deployed enabling the pontoon party to go ahead. With some 42 people on the pontoon, some of the boats had to adjust their fenders to hang lower. Anne Cole provided an impressive spread of homemade nibbles which were consumed in no time – it actually felt like the old days pre-Covid. 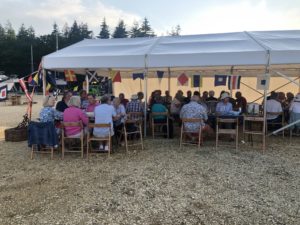 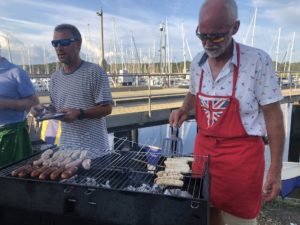 Following the pontoon party, we all convened to the new BBQ area where Chris Knight, Chief BBQ Officer, had three BBQs ready to start cooking. Chris’s three sous chefs – Nick Cole, John Gosnell and Philip Brown – worked hard in an attempt to cook everyone’s food to perfection. The marina provided a number of tables and chairs under a marquee making the perfect ambiance for a great evening.

The next morning most departed back to Chichester leaving Aquadisiac, Cool Runnings, Good Day Sunshine and Coco to have a relaxing day followed by an impromptu gathering on Cool Runnings in the evening.