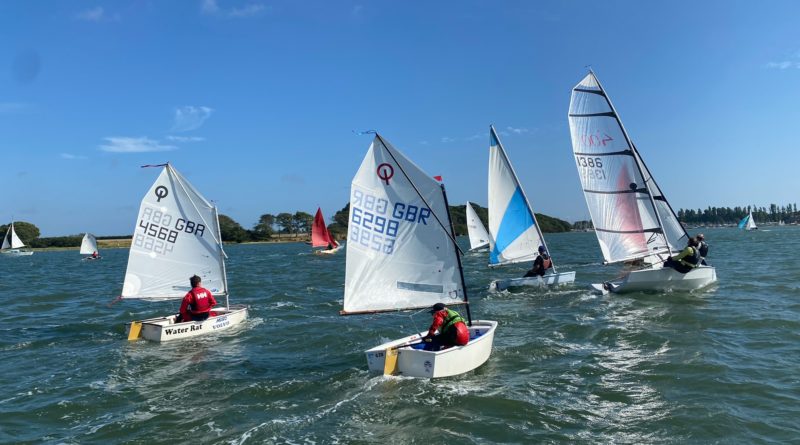 CYC was blessed with good weather for the annual Dinghy Week racing. 58 boats took part and enjoyed some close racing with, at times, exciting and challenging conditions. Thursday , Friday and Sunday were all very windy but Saturday provided perfect conditions with a fairly steady force three wind and bright sunshine.

17 boats contested the fast fleet races and there was close racing throughout. Nick and Roger Elliman ( RS400) (2) Nigel Skudder and Keith Hills Hornet) (2), Chris Hodge and Louise Varley(2000), Bill Grose and Sally Cantello ( Scorpion)  and Paula and Michael Olliff (2000) all scored wins leaving the result in doubt to the last day. Sadly, Nick and Roger were unable to sail that day leaving them on equal points with Nigel and Keith, who were the overall winners on count back. Chris Hodge and Louise Varley were third, after Sally and Bill did not sail the last race.

21 boats took part in the Slow fleet races. There several very inexperienced competitors who showed remarkable persistence and determination in a very windy series of races. Some expert sailing was also shown with the two Laser 4.7 s battling it out for the lead with the two Mirrors and Thomas Knight in his Optimist. Ethan Sparks in his 4.7 showed his mastery of the conditions with 5 wins. By the final day Jenny and Ellie Fletcher (Mirror) were tied on 11 points with Thomas Knight with Alan Bennett and Isabel Fletcher ( Mirror) and Jake Collins (4.7) on 12 points. After the very demanding final race Jake was second and Jenny and Ellie just pipped Alan and Jenny and Thomas for third place on count back, all having 11 points.

Special mention should be given to Ben Wragg who sailed every race in his Optimist finishing 9th overall and to Rosie Morgan and 9 year old Emilia Davies who sailed all but one in their Optimists. Emilia won the Becky Pye Trophy for the youngest competitor to qualify for the series. Everyone was very impressed by the resilience and determination of so many of our young sailors.

Overall a very exciting and enjoyable week – even for those of use who sometimes found the conditions too much and instead watched others showing how it should be done on the water.

For full results and a link to photo’s taken during the week, visit the Open Meeting Results page.