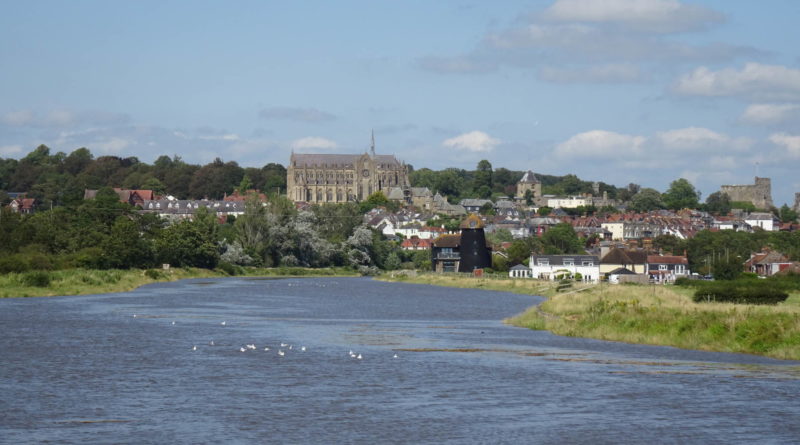 The original objective of this cruise was to head east out of the busy Solent for the Eastbourne Air Show on Friday 13th August with a stopover in Brighton. However the Air Show had been cancelled and the unsettled weather over the preceding weekend required a change of plan. With winds not easing and numbers reduced to a select fleet of five, the start was postponed for 24hrs, omitting Gosport on Monday evening.

Boats spent Monday evening either on buoys or in Sparkes Marina and the fleet was able to leave the harbour with enough water after LW on Tuesday morning, heading for the Looe Channel with the tide. Unfortunately, the wind had now disappeared and it was a motor all the way to Littlehampton.  All arrived safely around midday and were securely moored on the East Bank pontoon before HW and the tide change.  A relaxed afternoon watching the River Arun ebb rushing past was followed by drinks on the pontoon and for some, traditional Fish n’ Chips from Oscars in the cockpit.

On Wednesday Aquadisiac pressed on east to Brighton for the experience! The remainers made a trek along the riverside footpath through some jungle before a well-deserved, excellent Ploughman’s at the Ship & Anchor. Our well known expert Kerry was able to point out and identify the many birds along the riverbank. Some opted for the six minute train back to Littlehampton whilst others continued the trek with the thoughts of ice cream in Arundel and then returned by bus.

Thursday morning was spent clearing the build-up of flotsam around the boats after a thud from a substantial slice of tree trunk which hit Good Time Girl and Nourishment, thankfully without any serious damage. After leaving at midday with 2.5m over the bar, Nourishment headed for Brighton whilst Good Time Girl, Sounio and Quintette returned to Birdham and the Solent. Returning from Brighton, Aquadisiac motored past, but those not constrained by Birdham lock entry times were able to sail for East Borough Head, albeit with the SW/W wind on the nose! After a very lively passage through the Looe Channel, an amazing beam reach sail with SOG 8-9 knots from Boulder to Portsmouth provided a great finish.

On approaching Portsmouth, a VHF call from Solent Coastguard sought assistance for a stranded yacht.  After passing through Main Passage, Quintette responded and identified the 28ft yacht anchored off Southsea Pier.  After confirming sufficient depth of water, Quintette circled the yacht to pick up a line. A tow into Portsmouth Harbour was established with permission from QHM to use the main channel. Once inside the Harbour the work boat from Haslar took the vessel alongside into the marina. Quintette continued to Gosport, if a little later than anticipated!

If not quite the Far East Cruise originally planned, it was at least an Eastern Venture that proved worthwhile. Thanks to those taking part, namely Aquadisiac, Nourishment, Good Time Girl, Sounio and Quintette.