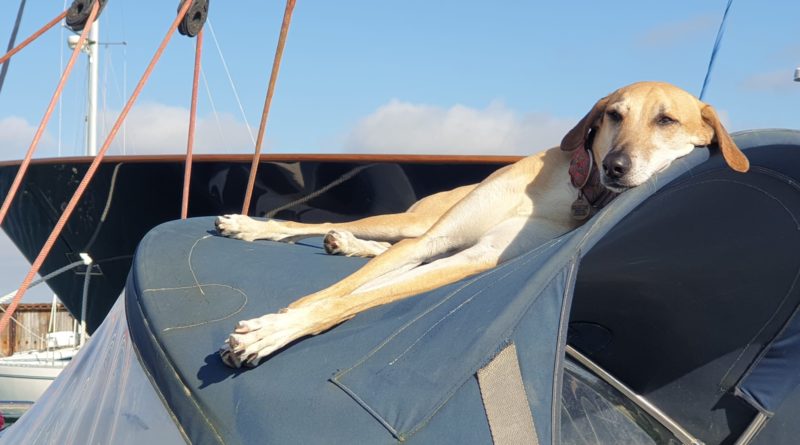 Weather at the end of September can be a variable feast. For this, the ante-penultimate cruise of the season, we were in luck, as the sun shone and a light wind blew. The plan was to muster in Shepards Marina in Cowes on the Tuesday and set forth on Wednesday for the arduous voyage up the Medina to the Folly Inn for activities and an evening meal. Most participants had done all this before, many times more than the brain cells could remember, but for yours truly, it was all rather new and exciting.

For some of us the sails were up but the engine was on as we picked up a light southerly breeze on Tuesday morning. By mid-afternoon most had arrived, and Shepards had kindly placed us in the same basin, and able to hop ashore.

The pontoon party at 5pm allowed us to gel as a group (again) in glorious sunshine, clustered around Habibi’s rear end, and monitored by the Fun Dog Three.  Several pairs of knees were on display but these were covered by the time we all assembled for the 15 minute walk to the RORC for dinner. Exercise is so important for a yacht crew. Dinner in the Holy of Holies was laid on specially for us, and the meal was good boat fare, served by a delightful staff. A quiz was held between courses, which proved to be even more challenging than the walk to dinner, but Team Misty Blue came in first (how often have we heard these words?) in a display of true leadership.

Wednesday’s weather was if anything even sunnier and calmer as the procession to the Folly set off.  By then we were nine boats so all were accommodated on the walk ashore pontoon. The rafting arrangement seemed specifically designed to allow the Habibi dogs to leave paw prints on as many boats as possible. Star Dancer and Dawn Chorus were the victims, for which the three issue an apology.

For most, the day’s ‘activities’ involved passage planning (book reading), pre-preprandials on board – reassuringly, according to the quiz, the Naval sun is below the yardarm by 11am – and then preprandials in the pub.  Some went walking, exercise being so important to a yacht crew. The meal in the Folly was good old pub grub, but the place seemed almost empty, adding to the end-of-season feel.

On Thursday, the weather still hadn’t broken, so there was a leisurely peel-off around 9am so that some could catch the tide to Yarmouth for Thursday night. This was certainly not in order to be in pole position for the Newtown Creek moorings on Friday.

A good cruise was had by all.