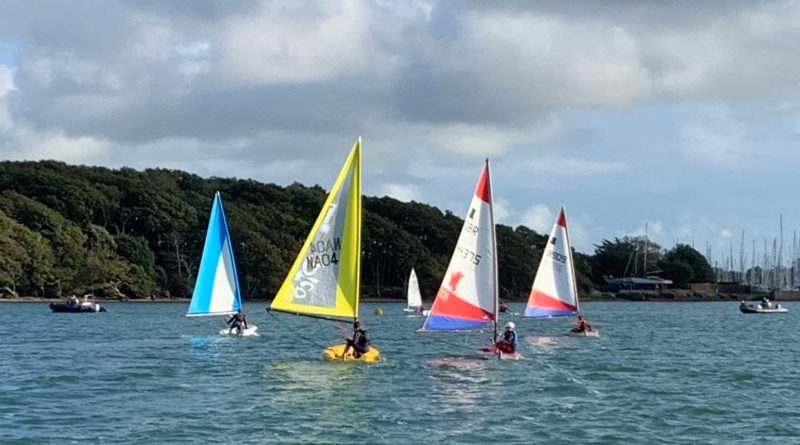 On the 25th October we laid on a Turbo Regatta for all the youth sailors at the club. We had 13 young sailors take to the water in a mix of Toppers, Oppies and Pico boats in the second Turbo Regatta of the season. The Regatta was run over 6 short races, with youth Parents supporting in the safety boats adding support and advice to all the sailors. I think the parents just enjoyed the afternoon as much as the competitors.

The weather started off with squalls of rain, but this soon passed to open up to a beautiful afternoon of sunshine and a lovely light wind. The sailors all represented themselves very well and improvements were made through out the day. The sailing was incredibly close, and there was a lot of banter on the start line between them all, I felt it was more a social gathering than a race, but once the start gun went off, the real business set in. The courses were simply laid out with small changes made during the afternoon as the wind changed direction. But the sailors took these changes in their stride and by the end of it very little separated the final positions and count back had to be done on a couple of them.

At the end of the day we had a small prize giving, which was sponsored by Force 4 Chandlery, and there were prizes for everyone, I think they were more excited about the chocolate buttons than the medals, but it was wonderful to see everyone so involved. A huge thank you to Pete and Suzy, and their dog, Doris, who ran the Committee boat, and helped all of the sailors with flags, timings and starts.

CYC turbo regattas are aimed at young sailors and take in all sailing abilities from RYA 1 to RYA 3 and above, they are based on having fun with racing in-between. If your young sailor or yourself would be interested in taking part or need some more information, please speak to Drew or email at sailing@cyc.co.uk