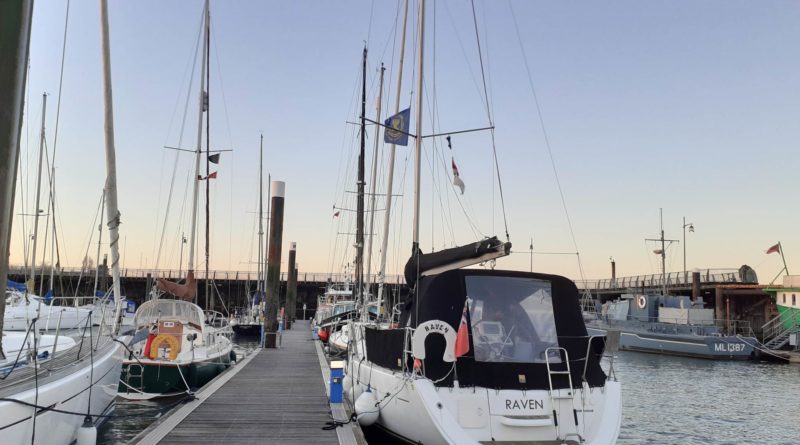 The first cruise on the Yacht Section programme took place over the weekend of March 19-20, though it was touch and go! Over the previous week the Cruise Leaders anxiously watched the weather, deciding to continue when the inshore forecast dropped to F6 from the east. The decision was sealed as we motored down the harbour when Kerry Dancer, who was leading the fleet, rang to say, “It’s gorgeous after West Pole, stick with it, we’re not turning back!”. We did stick with it, and it was mostly gorgeous! The sun shone and we sailed across Hayling Bay at about 7 knots with only a reefed jib, but it was a bit bumpy.

Unfortunately, the previous days’ visitors to Haslar marina were not so hardy (or foolhardy, some might say) and only Kerry Dancer and Raven were berthed on the visitor pontoon. The other three boats were spread across the marina. A fun hour was spent in the afternoon playing seek the CYC boats – not helped by the RC not flying any flags.

We were joined later by Roger and Sue from High Time, who braved the A32 from their berth in Port Solent for a cockpit/cabin (pontoon) party on Raven. We then decamped to the Castle Tavern for an evening meal.

Sunday was a different day. The sun still shone, the sea was calmer, the wind was still from the east but had dropped to F4, giving everyone an excellent beat back to Chi.

Thank you to High Time, Kerenza, Kerry Dancer, Windreaver and Uforia for joining us in a great start to the season.