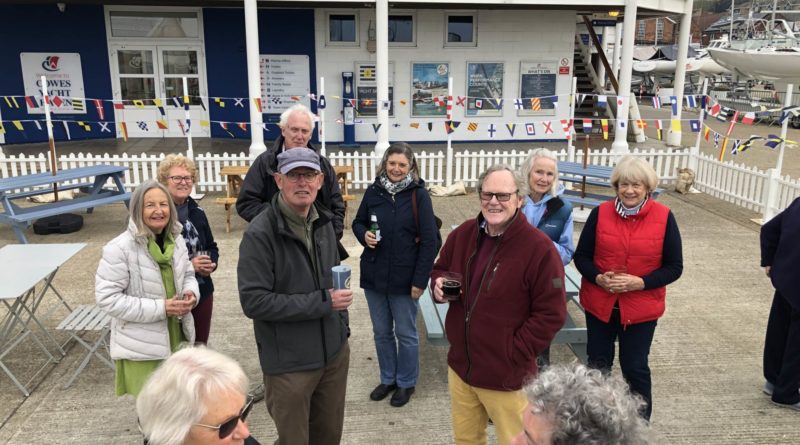 All 14 boats arrived safely at Cowes Yacht Haven where we had the usual pontoon party. We then went to the Upper Deck of the Island Sailing Club where we enjoyed a BBQ followed by yummy puds.  It was pretty chilly by this time so we didn’t linger to enjoy the views.

On Wednesday we were sad to say goodbye to Kerenza since David had tested positive and left us to isolate in Newtown Creek – he remembered to fly his yellow quarantine flag!  The rest of us had a lively sail tacking down to Lymington – a good test at the beginning of the season for ourselves and our boats. We were entertained by whoops of joy and screams from youngsters sailing in Lymington Scows and other small dinghies in the river.

Early evening we enjoyed pre-prandials on the balcony at the Royal Lymington Yacht Club where again, there was much activity on the water, being race night.

The following morning Philip Brown arranged a walk along the seashore to Keyhaven where we sighted Lapwings, Oyster Catchers, Little Terns, Egrets, even an Avocet plus many little brown jobs. For those not walking, hospitality was offered on Dawn Chorus whilst others explored the delights of Lymington.  The third club on our itinerary was Lymington Town Sailing Club which we visited for a good supper, again with excellent views over the amazing sea water swimming pool and the Solent. Frances on Habibi braved a cold water swim in the pool – well done!  Next morning the fleet enjoyed a short down-tide and downwind sail to Newtown Creek, as beautiful and peaceful as ever, for a lunch stop.  After a short motor to Yarmouth pre-dinner drinks were enjoyed at the Royal Solent Yacht Club with its commanding views over the Solent.

Some of our party left us for important engagements (was it a plant sale?), leaving 10 yachts to have a good sail to Southampton Water.  A large container ship tooted us rather rudely as it left Marchwood, so we didn’t argue with him. We can add here another pigeon story. A pigeon hitched a ride on Dawn Chorus all the way up Southampton Water. It appeared to be injured as it left blood, not only in the cockpit but also in the saloon, where it sat comfortably until we arrived at Marchwood Yacht Club where it flew away. We noticed at that time it was a racing pigeon – should we tell the race officer that some cheating was taking place?

Our final evening together was at our fifth yacht club where Steve Martin led some singing on the pontoon before we enjoyed a meal together.  In between courses, our brains were overtaxed with a short fun quiz – some of us need to revise our morse code and flags!

The icing on the cake was the trip back to Chi when yachts had a great sail nearly all the way home.