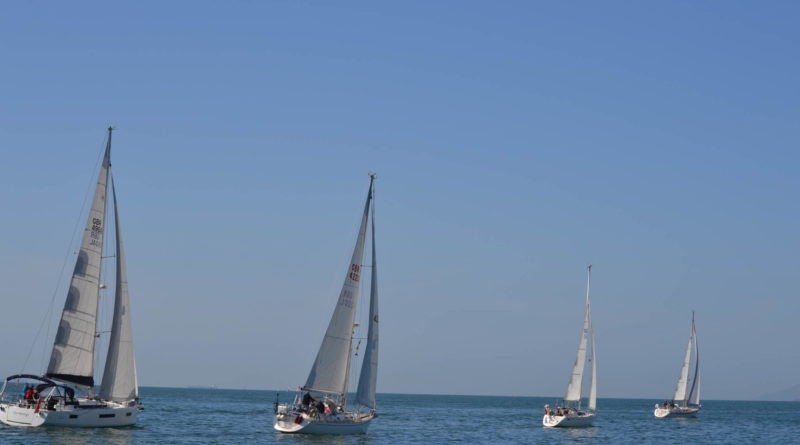 The 2022 Peter Buttery Salver, or the Cowes and Back race as it is more commonly known, was certainly an adventure more akin to the quests of old than a cruise to Cowes. Our intrepid adventurers faced trials and tribulations in their epic battle against the evil villain, The Wind, and its cruel henchmen, The Tide and the Cargo Ships, on a quest for the Salver, and its accompanying 1st, 2nd and 3rd Glasses! Not all of our adventurers made it, some fell due to gear failure and some fell foul of our villains. In the end it was left to just two lone boats fighting it out for the shining Salver. Real Hollywood stuff, perhaps I could sell the rights!

Following this probably over-hyped prologue, here is your race report…

The Cowes and back Race is our opening race of the season, so most crews have spent the last month frantically trying to finish their winter maintenance, clean their bottoms and negotiate with Premier to actually get their boats back on the water before the race start. We had a leisurely 10:30 start on the 14th May, with the tide in our favour and a lovely clear day with a gentle breeze from the NE. It was fantastic to see the fleet of boats amassing around Chi Buoy for the start; almost everyone made it as well, obviously trying to make a good impression at the beginning of the season! Having 17 boats on the start, and this being the first race of the year, we on the committee boat took the executive decision to make the start line very long so as to avoid ‘wearing’ Windreaver so early on in the season. Apparently it was still not long enough for some, but, for their modesty, I won’t grace you with their names.

Miraculously, we on Elyse got off to a cracking start and managed to open up a little bit of a lead from the pack, closely followed by Tern IV, Kerenza and Cool Runnings. Unused to being at the front of the fleet much checking of charts and buoys thus followed. As I’m the one who set the course in the first place, you would hope I knew where we were going, but when most of the fleet tacks away whilst you are holding what you think is a good course to the mark, it would make even the most cocky captain question himself!

Anyway, all was going well in our quest for the Salver, as most of the fleet cleared the first and second marks without an issue, until our villain, The Wind, decided it was time to act. By this I mean literally vanish into thin air, leaving the boats at the front of the fleet bobbing about, drifting on the tide watching the tail end of the fleet rapidly catch them up until they too sailed straight into the doldrums. The race now became entirely tide propelled with most boats reading 0.0 knots through the water for most of the afternoon. Much sail twiddling commenced and some of the shrewd old foxes used the last of their boat speed to get themselves into the best possible tidal flow. First Light, Kerenza, Stormcruiser and Muddy Waters all headed south leaving Elyse, Cool Runnings, and Good Time Girl in the middle of the Solent having a lovely chat whilst spinning about in the water going nowhere backwards.

Further back in the fleet a drama was unfolding when a 100,000 tonne container ship came barrelling down the Solent to find both Grace and Aquadisiac in its path. Now Grace probably would have come off okay, having already chalked up the Chi buoy earlier in the day, however not taking kindly to being honked at, Aquadisiac was not up for a game of tag so started the motor to get out of the way. In the meantime the rest of the fleet were doing their best to get south to avoid any future shipping. A wise move as it turned out, as the Southampton Port Authority had some more fun in store for us later.

As the afternoon wore on and the second application of suntan lotion was applied, the boats stuck in the middle of the Solent started to notice those who had managed to get into Osborne Bay looked like they were actively sailing in the right direction, rather than floating in circles. First Light, Kerenza and Stormcruiser were certainly making good progressing to the finish line and the huge wings of Cool Runnings finally managed to catch a zephyr to propel her in pursuit. The rest of us just continued floating about until the tide eventually carried us past the finish mark and allowed us to turn on the iron Genoas and make a dash for the marina and some well-earned liquid refreshment.

Later that evening the crews assembled for the traditional pontoon party where the winners of the outbound race were announced. 1st was First Light, 2nd Kerenza and 3rd Crazy Feeling, congratulations to them but also a hearty well done to all who took part and did battle with the tide whilst the Port Authority chucked ships at us from all angles. Suitably refreshed and re-provisioned, our intrepid crews got their heads down ahead of an early(ish) start the following morning.

What greeted us the next morning could not have been more different. The wind and tide had obviously had a bit of a half time meeting and decided to change tactics entirely for the second half. Drizzle was the first attack, followed by the wind spinning almost 180 degrees so now blowing directly from our destination and also giving it the beans with gusts in excess of 22knts. The last twist in the tail was yours truly timing the return race to make use of the very last of the favourable tide – however not accounting for a headwind slowing our progress and therefore running the whole fleet into a foul tide in Hayling Bay.

Undaunted by this, our adventurers donned an extra layer of clothing, stowed the suntan lotion below and prepared for a rough trip home. One by one the yachts slipped their moorings and proceeded into the gloom. Most hoisted reefed sails as they cleared the harbour, except the usual ‘Go Hard, or Go Home’ suspects who stuck the lot up and prepared to hold on! The start was an amazing sight, seeing almost the whole fleet hit the line under full power, heeling well over in the breeze with the decks taking the occasional wave, what a contrast to the day before!

As the fleet charged off, on starboard, in hunt for the first buoy, some boats managed to tack away early into clear air, whilst others were stuck to leeward, not able to tack until the weather boat did so. This split the fleet early on, with those tacking early gaining a clear advantage in both clean air and favourable tide. At this point Grace ran into a spot of bother, losing almost all steering. Unfazed, they retired from the race, dropped sail and motored into calmer waters to effect repairs. I take my hat off to Dawn and Paul for their calm handling of the situation and am pleased to report that they fixed the issue and beat most of us home into the bargain.

Grace was not our only casualty due to gear failure, the ‘Blue Water Burrells’ on Kerenza with their new work experience cabin boy Simon Benson, also had an issue which forced them to retire early. Thankfully another easy fix.

Most of the fleet had successfully cleared the first mark when our arch nemesis finally delivered the coup de grace, taking the wind from 20+ knots down to 4 knots and adding in a biblical downpour. With rain stinging our faces, and slowly seeping into our unmentionables, the crews had had enough. In quick succession all but two boats retired, turned on their motors and headed for home, leaving our two heroes alone, battling for the Salver. It was the clash of the titans with Steve and the crew aboard Crayzee Feeling doggedly holding on to the end whilst up in front Peter and the crew on Cool Runnings were determined to also finish the race. These two boats continued tacking back and forth up the Solent locked in a duel from which only one could be the victor.

Cool Runnings took the crown for the return leg, a first for her and her crew – massive congratulations. However, with her slightly better performance on day one, Crayzee Feeling took the overall prize, with Cool Running second and First Light third. Well done everyone for soldiering on through the weekend in some truly bizarre weather conditions and thank you all for your good humour throughout.

To see the full results of the race click on the link below.