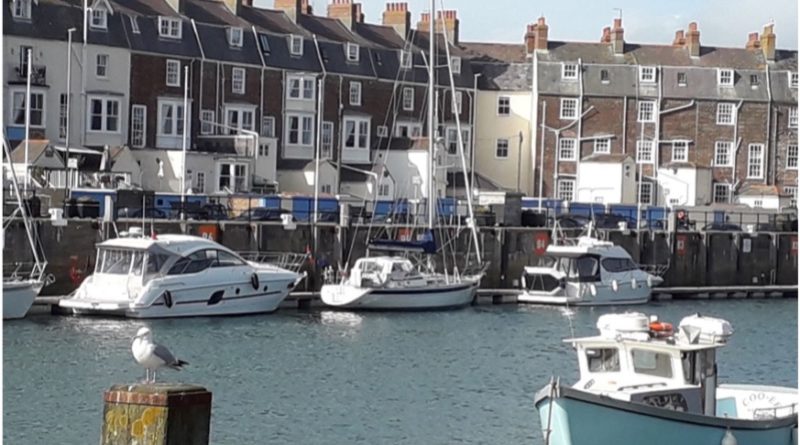 CYC (Motors) – Weymouth Cruise Report
13th to 17th May 2022
The first day of the cruise was Friday the 13th, what could possibly go wrong?
The cruise was to Weymouth via Lymington with 4 confirmed boats. Our leader Digby, Claire and Tilly Armstrong together with Heather Baker on their boat Bellissima, Graham and Jane Wheeler on their boat Mam’selle, Richard and Viv Saker on their boat Vorsicht and Kevin and Maxine Torode on their boat Delta Flyer.
Bellissima, Mam’selle and Vorsicht decided to leave Chichester at around 10:30, where-as Delta Flyer decided to leave earlier. Delta Flyer had a relatively easy journey and was berthed in Lymington Yacht Haven, after refuelling at Berthon Marina, just after 10:00 am. Sadly, Mam’selle and Vorsicht found the sea conditions at Chichester Harbour entrance a little too much and decided to leave it for another day, where-as Bellissima being a larger boat, decided to continue and tackle the conditions and arrived safely in Lymington early afternoon. Berthing Bellissima proved a little challenging due to the wind, but Digby handled her well and she was soon tied up securely in her berth.

Even though Delta Flyer had a good journey, an issue with the 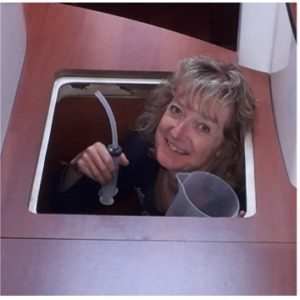 boat was identified shortly after berthing. Initially it was thought that the engine bay ventilation fan had stuck on, but shortly after two engineer investigations, it was discovered that an underfloor automatic bilge pump had been triggered. Having removed some flooring, it was discovered all that was needed to resolve the problem was to wipe the pump sensor with your thumb. The engineer said that it must have been an oily film from the bilge water. Once the engineers had left, we decided to take the opportunity to suck up any water from the bilge before we put the floor back. This unfortunately, had to be done by Maxine as Kevin could not fit into the hole.

Note: Ensure you have your boat manual on the boat when you go cruising. You never know when you may need it. Mine was left at home in the lounge!
Part of the cruise plan was dinner at the Lymington Yacht Club. Digby and Claire had an additional duty to perform over being our cruise leader and dinner companion and that was to represent CYC in the role of Rear Commodore (Motors) at Lymington Yacht Club’s 100 year anniversary celebration. This didn’t take long and soon we all joined up for a great dinner, in good company, with memorable views over Lymington Harbour. 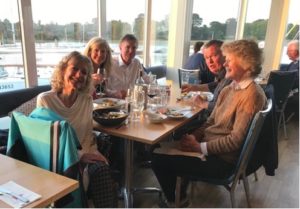 Saturday’s weather was fantastic, sunny with very low winds. The tides proved to be in our favour too. Leaving the berth at 11:30 am, we easily navigated the Needles channel to the inner channel at Durlston Head. We decided to spend some time in Lulworth Cove, before moving onto Weymouth Marina. This is the reason we travelled close to shore via Durlston Head and St Alban’s, with St Alban’s race proving to be a little rougher than anticipated. At one point on the crossing of the race, Bellissima had water flying over her roof. Luckily the rough conditions were short lived, only 10-15 mins at most, after which the sea once again, became flat.
Just before Durlston Head, Kevin noticed that Delta Flyer’s engine temperature was low, reading 53deg C instead of its normal

85deg C, this continued until we had all reached Lulworth Cove. Kevin decided to continue onto Weymouth at 6 knots (turned out to be a great journey with great scenery including a first view of Durdle Door) and Digby took Bellissima and team into Lulworth Cove for lunch and a swim, with Heather and Digby taking the plunge – Brrrr. 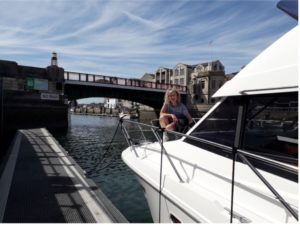 To get into Weymouth Marina, we had to get through the lifting bridge. Kevin arrived in plenty of time to moor on the waiting pontoon for the 16:00 bridge opening with Digby also managing to catch the 16:00 opening. Infact there were quite a few boats queued up for the 16:00 opening, which made manoeuvring within the limited Marina area a little busy, but not stressful. We were both securely berthed by 16:30 when Digby announced that he had lost power to his Plotter when leaving Lulworth Cove!
Originally it was planned to moor up at the Town Quay, but earlier in the week prior to departure, Maxine found out that we would have been rafted 5 deep with approximately 60 boats around us, so Digby managed to negotiate alternative berths at the quieter inner Weymouth Marina.

We all met up on Bellissima before a short walk to our prescheduled dinner at the George on the Town Quay. Again, a great evening with good food and company.

Sunday’s weather was a complete contrast to Saturday’s. It was colder, we had some sun but more cloud with rain showers and later thunder storms and lightening. Infact a great day for Kevin and Digby to progress some boat troubleshooting, with Maxine and Claire progressing some resupply and Heather some work catchup.
After a number of externally oriented conversations, Kevin decided that there wasn’t much he could do to resolve Delta Flyer’s underheating issue in Weymouth and therefore, he and Digby spent some time troubleshooting Bellissima’s Plotter power loss. Unlike Kevin, Digby had his boat manual onboard, specifically the all-important wiring diagrams. In the end the issue proved to be with a switch in the cockpit.

We were due to travel home on Monday, but the wind forced us to make new plans. The forecast indicated that the wind would be 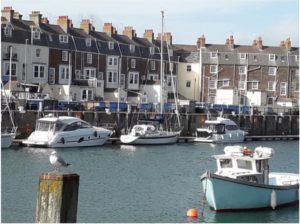 low enough to try an early departure on Tuesday. Our planned departure time would have the tide in our favour all the way to Chichester Marina. Digby decided to refuel from the mobile fuel bowser in the inner harbour area, although timing with respect to availability, seemed to be a little hit and miss. Due to our need to depart earlier than the first bridge opening time, we had to move the boats to the outer Town Quay on the Monday and therefore, leave the berths in high winds coming from the port side. This provided an interesting second perspective on Weymouth boating.
Before getting underway, we had a scare when we could not get Bellissima’s sun roof to close, Digby soon resolved the issue with a little bit of targeted force. Bellissima got off her berth without incident and once moored at the fuel jetty, Heather walked back to help get Delta Flyer out of her berth. This resulted in Heather nearly going in for a swim, as the wind caught the bow and the bow thruster was too weak to counter the force, so Kevin had to accelerate out of the berth whilst still in control of the bow, almost taking Heather off the pontoon. A short emergency situation arose when the stern rope went into the water, but Maxine was able to sprint to the rear from the bow and retrieve the rope before it could get tangled around the prop’, a few lessons learned by all!
We moored alongside the Town Quay pontoon with no issues and with plenty of time to explore the Nothe Fort Park on the South side of the Harbour. With the sun out and a chill to the wind, we had a great stroll over the bridge, along the South wall to the Fort and then around the park back to the boats. Tilly went for a quick swim fetching wood, which appeared to be a favourite activity for her.

There was no rafting on the Town Quay and the facilities were modern and a pleasant surprise. Entertainment was provided, watching the many sailing boats of the Weymouth Sailing Club, opposite our mooring, sail directly into their finger berths under sail – Great skills!
We departed at 07:00 in the morning, with the sun shining and the wind as forecasted. The journey home was just as planned and the weather was as expected. We avoided the St Alban’s race and Lulworth firing range by routing ourselves seaward. There were no issues going via the Needles Channel. We arrived at Chichester just before free flow and were berthed by 11:30 am.
A great cruise, with good company and many learning and enjoyable experiences – Thanks Digby!