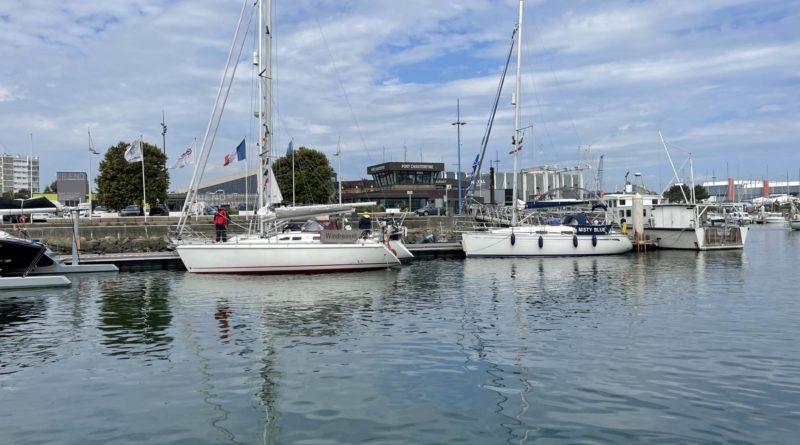 Sitting on a train, as I am now, with the Cross Channel race behind me, I feel that the turbulence and uncertainty brought on by a) Brexit and b) the virus which shall not be named, can finally be put behind us. When John and I discussed the Cross Channel race and the onwards RC cruise to the Channel Islands at the beginning of the year, we were both adamant that they would go ahead and not take the easy route and head to the SW for the second year in a row. We hoped that the strength in numbers would offer both reassurance to those on the cruise, plus collectively help navigate the various immigration and customs requirements now imposed on us. The end objective was obviously to have a great time, but also to open up cruising to France and the Channel Islands to anyone who was daunted by the crossing and the red tape. Unfortunately there is a fair bit of red tape to be negotiated, and it is irritating compared to our previous freedom to just float about. However, as we now know it is pretty straightforward once you embrace it and it should certainly not stand in the way of obtaining 19 litres, per crew member, of affordable French plonk and a selection of overpowering cheeses! If anyone would like any more info on the requirements for sailing your boat to France there is a document which outlines all you need to know in the yacht docs section on the website.

The Cross Channel race is unique in the CYC racing calendar, in fact it’s pretty unique as sailing races go in general, by the fact that sailing is optional! Understanding that we are, at heart, a bunch of jolly sailors for whom the journey is as important as the destination, there is no getting away from the fact it is 70+ miles to Cherbourg and nobody wants to spend two days floating about the English Channel being bow fodder for the various merchant ships plying their trade in these waterways. So if the wind does not allow you to make sufficient progress, you are allowed to revert to being a motor boat. A strict set of parameters dreamt up by my cunning predecessors, means that there is a still a healthy level of competition between those who motor or stay sailing, as time penalties are inflicted upon those under the ‘iron topsails’ and if they should be giving it too much welly, then they are further flogged for their impatience. Lastly, there is no formal start time, boats are allowed to leave whenever they like on a certain date and take their times between two points on opposite sides of the Channel.

So, enough about that, you want to read a race report!

There is always much weather watching before any Channel Crossing, and this year was certainly no different, there was a slow moving low pressure sat over the East of England which was dealing us all sorts of constantly changing wind directions and strengths in the proceeding forecasts. Thankfully, a couple of days before it became clear that it would be possible for us to make the crossing, however the wind strength was a bit on the light side.

Most of the fleet opted for a 05:00 departure from Bembridge Ledge buoy – this time was landed upon by most skippers as the intersection on the probabilities graph between the best possible tide to get past the IoW vs the chance of crew mutiny due to having to get out of bed before the sparrows. So, ten out of the fifteen boats were pottering around the buoy for our informal start. Kerenza and Cool Runnings had arrived early and decided to get cracking so were mere white triangles in the distance for the rest of the fleet to chase. Also, a quick investigation of MarineTraffic.com showed that our cunning Commodore Simon Benson and his trusty sidekick Jerry Quinton on Misty Blue had set off at just after midnight and were already negotiating the shipping lanes, so keen were they to retain the Cross Channel Plate…. or arrive before the local Caves a Vin called time for the day.

The fleet settled down to a pretty uneventful morning, the wind was fair and the progress south was  good until just before England slipped below the horizon, when the wind died off and the fleet fired up the motors. Sadly on Selene IV the motor was not keen on the journey so gave up trying. They turned about and headed for home, safely arriving back at Chi later that afternoon. The rest of the fleet continued under motor until the coast of France loomed in the binoculars off the bow. It seemed that even the usual merchant shipping was having an easy day of it as the fleet hardly saw another ship throughout the whole crossing. As France grew bigger on the horizon the wind picked up a bit and allowed some boats to try sailing for a few hours, only for it to disappear again. Given that the tide off Cherbourg was running west at four knots, the fleet did not want to bob about in it for too long for fear of being swept past, so on came the motors again for the final hour into Cherbourg.

As we on Elyse approached the harbour we were a little concerned to see a black rib, driven by a stern looking character, heading at high speed straight for us. Standing by to have our liberties challenged and bilges inspected we were greatly relieved when he stopped 100 yards ahead of us, lit a cigarette and got out a fishing rod … he even gave us a little wave as we steamed past! Bonsoir to you too Monsieur!

On arrival in Cherbourg the fleet headed to the Rally mooring pontoons to find a deserted Misty Blue already moored up, her crew either sleeping or refreshing themselves in the marina bar (….it was the latter!). All fourteen boats made it safely and rafted up on each other, filling the marina basin with CYC flags. Much chatting on the pontoon over a few well earned beers followed with most crews heading to bed early following the long day.

The next day the marina had arranged for the local Border Police to come and stamp our passports, a sad reality in today’s post Brexit World. Once they had finished with us we were free to explore/ raid the local boulangerie for breakfast.

Sarah, on board Pell Mell, had arranged a group wine tasting in the afternoon. CYC crews never shying away from a drop or two, especially if it is free, were out in force. It was an excellent afternoon with many good wines. The wine merchants also kindly offered to deliver our various hauls back to the marina in their van, which they did very promptly, beating most of the crews, who were walking back to the marina. The crew of Jessica got a fright as they returned to see that she had taken on a considerable list to starboard. All was well as the kind chap from the wine merchants had loaded up her side deck with various boxes of booze causing her to appear to list somewhat alarmingly from a distance.

That evening we had the traditional pontoon party and prize giving. Simon and Jerry’s tactic of setting off early in a more favourable wind had paid off as they took 1st prize, Cool Runnings was 2nd and Tern IV was 3rd. Well done Simon, however I have to warn you that your tactics might lead to a tightening of the rules for next year, you’ll have to wait and see!

There followed a dinner in the marina restaurant for all of the crews, the food was excellent with fruit de mer and steaks all round, even if the service was a little relaxed. The next morning the boats continuing to the Channel Islands on the RC Cruise left just before midday, leaving Elyse, Cool Runnings and Jessica to explore the rest of Cherbourg and play at driving a nuclear powered submarine on board Le Redoutable, before sailing straight home in similar no-wind conditions on Sunday.

For the full results please click on the link below.