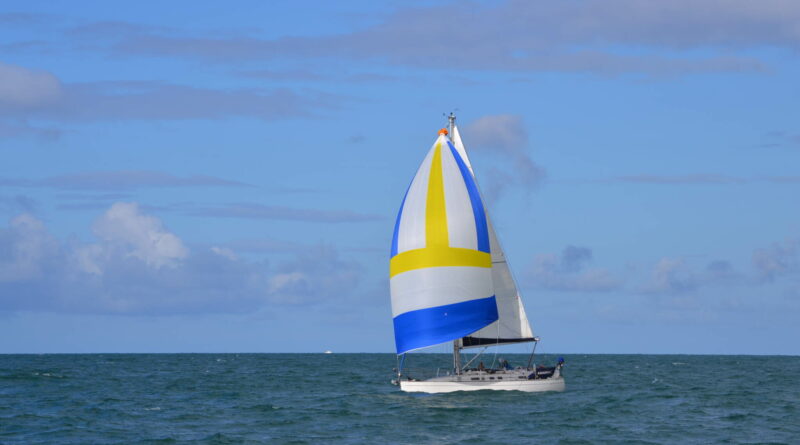 The CYC Round the Island Race is supposed to be the ‘Sensible Sailors’ alternative to the actual Round the Island Race, a sedate jolly with a pause for tea and a snooze half way around,  not hurtling about the Solent getting wet! In the week preceding, the Met Office changed its mind about the forecast like a Labrador with two tennis balls and was predicting everything from no wind to a gale, then back to no wind again. Thankfully, by Wednesday it looked as if it would be meteorologically possible to get around, however how fast was anyone’s guess at this point.

To make the most of the westbound tide we had quite a late start on Saturday afternoon. When I woke up in the morning and heard the wind whistling through the rigging of the boats in the marina, it was obvious that some higher power had put a tick in the ‘Lots of Wind’ box for this weekend. Combining this with the three text messages I received from boats pulling out of the race, before I even got out of bed, it was a shaky start.

Encouragingly, a cup of coffee later, I turned on the VHF and was greeted with the excited tones of Cool Runnings requesting a lock out (keenos!) and I could also see various other boats’ blips on AIS as they too prepared for departure. All in all, nine boats donned their respective big boy and girl pants and headed out of the harbour into a howling wind, all secretly hoping that Mr Met Office was lying about the predicted 28 knots of wind on the menu around Cowes. What we did not expect was that although it was blowing old boots, the sea was pretty flat with only a slight chop and the sun was making a very welcome appearance. That is not to say it was going to be an easy day, but it did apply a thin veneer of pleasantness over a day when, on occasion, a change of underwear would be required by most crews.

The start was almost straight into wind but thankfully all boats started on the same tack, which was a relief for us on the committee boat. We are pretty much sat dead in the water when the gun goes and it is always somewhat unnerving to see a 40+ft, 10 tonne yacht bearing down on you when you have no hope of being able to get out of the way.

At the gun Kerry Dancer had to do a 360 for some unseen indiscretion – thank you for your honesty Jerry.  However you would have got away with it, as we on the committee boat had all of our attention focused on Ursa Minor, who had run into a spot of bother and had fouled her genoa sheets causing her to come to a dead stop exactly where we wanted to go.

The start negotiated, we all set off up the Solent at a great rate of knots, boats heeled well over and side decks awash. Most boats were pretty heavily reefed, some not so much – no prizes for guessing which ones preferred life at 45 degrees! The following tide and easy sea conditions made for some impressive speeds across the ground.

Lymington is unquestionably to the west of Chichester, and with the wind coming from the usual South Westerly direction, most boats could make great progress on the port tack. However, every now and then, obstacles such as Portsmouth and the Bramble Bank got in the way, forcing the occasional tack to head dead south to get onto the IOW side before returning to the port tack to make progress in the desired direction. Most boats aimed to get onto the IOW side around Cowes so as to take advantage of the ‘express’ tide off the Gurnard Ledge, which meant that as we approached Cowes, the fleet started to bunch up, with the exception of Stormcruiser, who has an amazing ability to sail almost dead into the wind and steamed straight up the centre of the Solent.

With the wind strength and 2.5 knots of favourable tide, the boats made rapid progress down the North West coast of the IOW. Up ahead the crew of Cool Runnings were already choosing their cocktails in the marina bar at Lymington when Crayzee Feeling,  Aquadisiac and Stormcruiser crossed the line within a few minutes of each other. The crews of Pim and Ursa Minor followed Elyse over the line a short while later, whilst Kerry Dancer continued to battle the wind in a rapidly diminishing favourable tide. Sadly, Saxon decided to retire after a slightly ‘clenched’ episode with a small yacht coming out of Cowes with too much canvas up.

Due to our late arrival, everyone planned to have a quick bite to eat on board before congregating on the pontoon for a few drinks, yarns and the prize giving to wrap up day one. Just as we were getting into the swing of things the crew on Kerry Dancer came motoring in to much applause from the group for their stamina. Mob handed, she was moored up and the crew furnished with beers before Jerry even had a chance to take his life jacket off.

So determined were they to celebrate their win (plus hopefully give themselves an advantage the next day) the crew on Cool Runnings decided that an after-party in the marina bar was called for, and sadly a fair few of us were too tired to spot their tactic and tagged along…

The following morning alarms all had a 5 in the title, as the start line was a two hour motor away from the marina. Again, I stuck my head out of the cabin to see Captain Keeno and crew (Cool Runnings) already heading out of the harbour! At a slightly more delicate pace the rest of the fleet followed in due course with the crew of Aquadisiac somewhat sore headedly registering a protest against the dastardly after-party tactics of the Cool Crew before we had even got the sails up.

The start for the second day was at the Bridge Buoy, just off the Needles. The sea conditions around the buoy were less than favourable to those who had possibly stayed out a little too late the night before, so it was with great relief that we could start early and get on with the job of sailing home via the south side of the Island. The wind had mellowed a little overnight, however we were now sailing with it on the stern quarter so a fast downwind sail lay ahead of us. 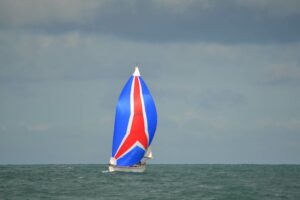 On the start Cool Runnings hoisted the biggest bedsheet she had on board and quickly disappeared into the middle distance. Further back in the fleet there followed a succession of terrible cruising chute hoists as we all tried to focus our foggy brains on the task at hand. We then all settled down to watch Aquadisiac try and get her sails sorted out when, all of a sudden, Stormcruiser disappeared underneath the most ludicrously sized cruising chute you can imagine on a 36ft yacht. Apparently it is ‘within regulations’ …. for a boat twice her size?

With a fantastic wind and a following tide the whole fleet were cracking on at 7+ knots over ground, on Elyse we got 11knots as we went around St Catherine’s lighthouse with Crayzee Feeling and Stormcruiser close up our stern gland, all the time chasing the tiny blue triangle of Cool Runnings in the distance.

When the boats rounded the corner of the IOW and began heading for the finish, a split in tactics developed. Some chose to continue heading east before gybing north to keep the wind off of the stern quarters. Others decided to go dead downwind, goose-winging genoa and cruising chute. To be honest, both tactics seemed to be about the same as the fleet came back together near the finish at Chi buoy. The biggest upset was on board Cool Runnings. Being, at one point, over two nautical miles ahead of the fleet, they sailed slap bang into a hole in the wind within sight of the finish. On Elyse, in second, Cool Runnings started getting bigger and bigger on the horizon until we were within hailing distance of her before sailing into the same patch of no wind, about 300 metres to the east. Both of us now totally becalmed, we watched the rest of the fleet closing on us as we sat there sails flapping flaccidly in the slight swell. 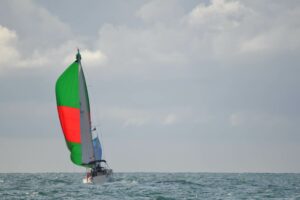 As Crayzee Feeling and Aquadisiac approached there was a slight ripple on the water around us and the sails started to fill again. Very sadly for the Cool Crew the wind hit Elyse first, allowing us to pull ahead. Kate and I on Elyse could not believe it as the wind built rather aggressively allowing us to surge off dead downwind, finally crossing the line on the jagged edge of a broach, ahead of Cool Runnings who, after a couple of gybes, followed a few minutes later. Then the rest of the fleet followed closely in what has made the record books for the fastest return journey from Lymington we’ve ever had.

The final results were Elyse came in 1st, Aquadisiac 2nd, Crayzee Feeling 3rd, Pim, 4th, Stormcruiser 5th, Ursa Minor 6th, Saxon 7th and Cool Runnings in 8th. Kerry Dancer, having decided to sleep in and not join in day two, returned to Chi via the Solent, arriving in time to see the fleet cross the line.

The overall results were extremely close with Aquadisiac, Crayzee Feeling and Elyse being level on points with 5 each. Elyse claimed the win, with a 1st and a 4th. Second was Aquadisiac who beat Crayzee Feeling by only 5 mins total corrected time after two days and 55 miles of racing. Congratulations to all of the crews who braved the forecast and, I hope, were rewarded with a fantastic weekend’s sailing.

One of the key points in the job description of the Racing Secretary, right after the line which states ‘Promote yacht racing in a fun and friendly manner’ is ‘Don’t be any good at yacht racing!’ Therefore it is a little awkward that, on this occasion, we appear to have actually won something. Please rest assured that this was total fluke and we will return to our standard mid-fleet performance, or worse, in the upcoming races. We have the Bramidge Race coming up at the beginning of September, for which there are some spaces left, and the CYC Pursuit race the following day, so if anyone would like to join us please sign up on the CYC website.

Have a good summer all, see you in September.

You can click on the link below to see the results in full detail.

Sailwave results for CYC Round the Island Race 2022 All Races