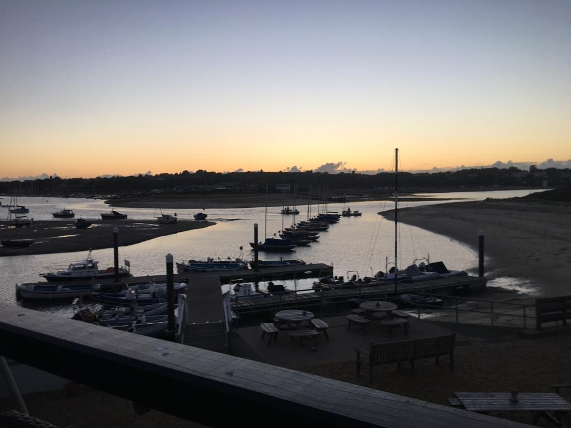 Friday 01 July
The forecast was not particularly favourable for the short passage to Bembridge F4-5. Nola made a quick exit from the lock and held on the outer pontoon and Himalia followed us and anchored at East Head for breakfast. Soon after, the lock was closed for essential maintenance (it really wasn’t our fault!!!) a queue for the rest of the cruise started to build, apart from Mascaret travelling from Portsmouth. 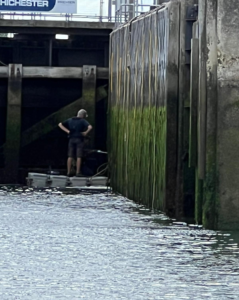 The crossing was pretty lumpy to say the least and on arrival into Bembridge we were greeted by gusty winds. Arkaig was shadowed by Bowhunter 2 and Jules to try and smooth out the worst of the chop. All arrived by 1430.
1700 we met on the hard to have drinks and nibbles before commandeering 3 water taxis to take 29 of us to the Bembridge Sailing Club for Dinner. The club was very welcoming, the food good and views stunning. We all returned via a beach pick up a little merrier than when we arrived and with full stomachs. 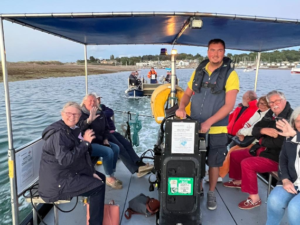 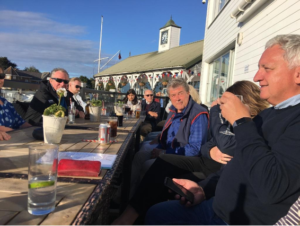 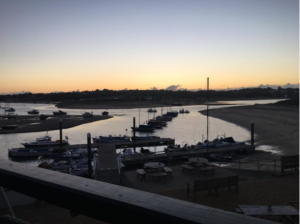 Saturday 02 July
A day at leisure and time to prepare for the beach BBQ. Weather was again windy but there was no rain in the forecast.
We started to meet on the beach around 1700, lead by the advance party of Graham and Jane to secure our position. Many a trolly load was transported to the beach with the Cobb and Lotus (new batteries at the ready) BBQs. 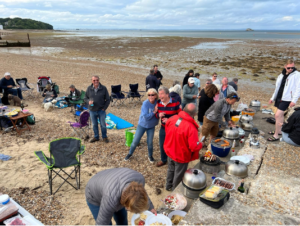 The evening started with a plentiful supply of Pimm’s (who needs Wimbledon), thanks to Eddie, Collette and crew. The BBQ’s were fired up after a few technical issues with the Lotus!!!!
A pleather of meat and vegetables were sizzled on the BBQ’s with an amazing choice of sharing salads brought by everyone. 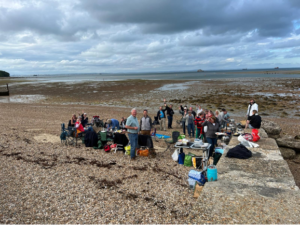 This was followed by a table full of desserts, pavlovas, brownies, fresh fruit and cheese and biscuits washed down with vintage port and calvados. 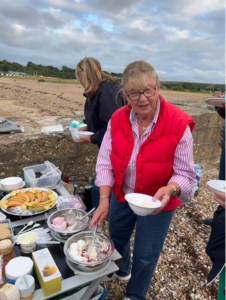 Jo decided the time was right to start the camp fire. Spoon in hand, she prepared the fire bed and lit the Swedish Torch followed by solid oak off cuts from her new kitchen floor and logs provided by Ian. Once these ran out, scouts were on the lookout for flotsam and jetsam on the beach to keep the fire roaring. 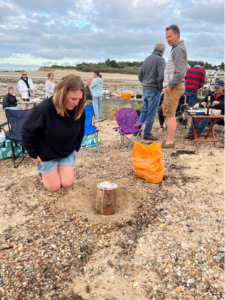 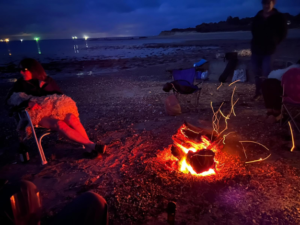 And then the entertainment began!! Mike decided to fashion microphones from large marshmallows and wooden skewers and, following in Simon Cowell’s footsteps, had the girls performing Dancing Queen and Bohemian Rhapsody. 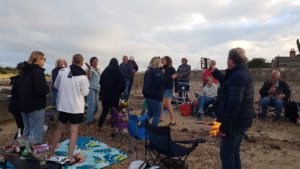 With the sun setting, another memorable evening was chalked up for the CYC Motor section. 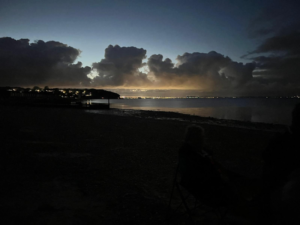 All boats returned safely on Sunday. Although breezy much better than the conditions on Friday.

A massive thanks from Nick and Louise to everyone who braved the weather and made this a great cruise. Without all of your contributions and enthusiasm it would have not been the same.

Nick and Louise signing off.