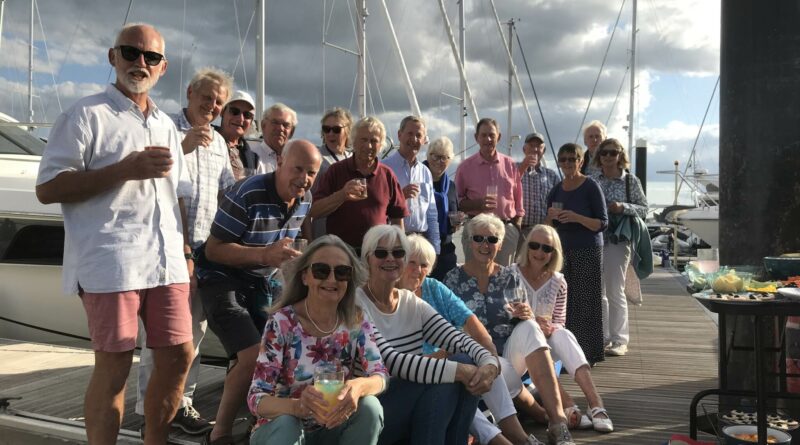 Our rally was based at Swanwick Marina on the River Hamble.  Once all the boats had arrived we started with pleasant circular walk to Swanwick Lakes which is a hidden gem of a nature reserve managed by NATS (National Air Traffic Service).  NATS are responsible for UK and Atlantic air traffic control. The walk was followed by a pontoon party and then a group meal at The Old Ship Inn.

The following day was the highlight of the cruise. The dates were carefully planned around when we could get up river on the stand of the tide and back on the ebb.

Everyone joined us for an up river adventure by dinghy or paddleboard. We travelled up under the three bridges to arrive at Manor Farm pontoon in the Hamble Country Park. We had three people paddleboard all the way there from Swanwick Marina with a further three people having a try on a paddleboard for the first time.

Some of the group then continued all the way up the river to the Horse and Jockey at Curbridge for a riverside drink. A kingfisher was spotted amongst the reeds by a few lucky people.

Then we returned to Manor Farm pontoon for a picnic with the whole group before timing it nicely for the ebb tide to take us back to Swanwick Marina.

Thanks to all the participants (Sounio, Quintette, Firedragon, Bugsy 2, Coco, Avalon, Aquadisiac, Canopus and Good Day Sunshine) for joining in with the activities and making it fun.