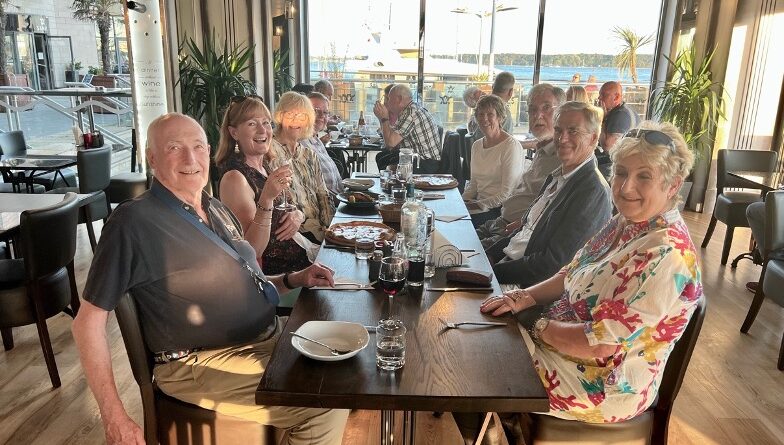 As often happens with cruises early in the season, the number of boats booked originally, changed significantly in the last few days before the official start date. We had four boats booked and three cancellations with one late addition and one boat joining in Poole but making their own berthing booking arrangements.

As originally planned Lymington Yacht haven had been booked for an overnight stay on the way to Poole and (optionally) on Monday night on the way back. Due to the cancellations only one boat (Sea Otter) stayed overnight. The wind forecast was SW Force 4 gusting 5 and ‘Vorsicht’ cancelled due to anticipated sea conditions in the Solent.
Lymington Yacht Haven were informed, by telephone, of all the latest cancellations.

On Friday morning the wind forecast had reduced to a steady Force 4 and veered towards the West so ‘Vorsicht’ departed Chichester marina at about 10:00 taking an hour to proceed down the harbour to West Pole. Going down the Solent and passing through the Dolphin passage a steady cruise speed of about 14-15Kts was achieved but crossing from Gilkicker point toward Cowes, the wind and tidal current made sea conditions rather turbulent and speed was reduced to 10-12Kts.

After passing Cowes the passage down the Western Solent became a lot smoother when closer to the mainland side and ground speeds of about 18Kts was easily achieved. Passing Hurst Narrows an immediate turn was made to Starboard to take the North passage past the Shingles bank.  The passage through Poole bay and past Hengitsbury Head was in smooth water sheltered from the westerly wind. Poole Harbour was entered via the East Looe channel for a short run to the entrance of the Town Quay marina. We arrived at about 13:50 in time for a quick lunch before visiting Sunseeker.

Sea Otter and Tranquility were already berthed. Vorsicht was berthed very close by allowing all boats and the land party to enjoy a pontoon party after the Sunseeker visit.

At 1500hrs on the Friday afternoon Richard had arranged a tour of Sunseeker’s magnificent facility in Poole.  We assembled at Sunseeker’s sales office on the east bank of the river close to the RNLI offices.  We were welcomed by sales director Spencer Brown and tucked into coffee and cakes followed by a introduction to Sunseeker including a promotional video espousing the Sunseeker lifestyle.  We were hooked by this stage!

We then split in to two groups led by Andy and Colin and were ferried by minibuses to the main manufacturing facility on the west bank.  Originally operating from just one shed, the business has expanded steadily over the years and now occupies most of the west bank.  It is now by far the largest employer in Poole taking on staff from apprentices upwards.  We were lead through shed after shed showing each stage of how these fabulous craft are constructed.  All questions were patiently answered with no question seeming too daft.  Both Andy and Colin were both passionate about Sunseeker, having worked there as man and boy for many years.  In fact Colin is employee #33; there are now nearly 2,000!

After the tour we were taken back to the sales office and let loose looking over three craft on display there when not being used at boat shows – a Predator, Manhattan and Sport Yacht.  Not one under 65’….  Forget booking an appointment at a Boat Show and having to put on silly slippers, we were literally encouraged to climb all over them and poke into every nook and cranny.  It’s remarkable how fussy one becomes in criticising aspects of each one, despite being unable to afford a fortnight’s charter, let alone a new one!!  What was interesting was how each appealed to different people.

The winner of the visit has to be Kate Williamson who was able to determine that her beloved Wizard was in fact the 17th Martinique built.  Colin remembered her being built in 1990 because the first purchaser always bought boats with a red over grey hull.  She was capable of 35knts max speed burning 95lph when she left the factory.

Overall, we were very impressed at how welcoming and accommodating the Sunseeker staff were despite our inability to wrestle a cheque book from any pocket at the end of the tour.  A big thank you goes to Richard Saker for organising this and especially to Sunseeker themselves for the generosity of their time.

Friday evening
After a successful and enjoyable visit to Sunseeker, everyone gathered on the pontoon next to Vorsicht to enjoy a pre-dinner drink and snacks. Dinner was booked at Rosso’s Italiano very close to the marina.

Nothing was planned for Saturday as all the boats had visitors booked.

All boats departed Town Quay in the morning to various destinations.

Tranquility was planning to go to the West Country.

Vorsicht planned to go to Port Solent for an overnight stay with a return to Chichester marina on Monday afternoon.

I wanted to check precisely how ‘Vorsicht’ a Nimbus 310C equipped with two Yanmar 125HP turbocharged diesels operated at the best cruise speed for performance and fuel consumption. So, in order to do this we left Chichester marina having filled up the day before and on our return we filled up again immediately after locking in.