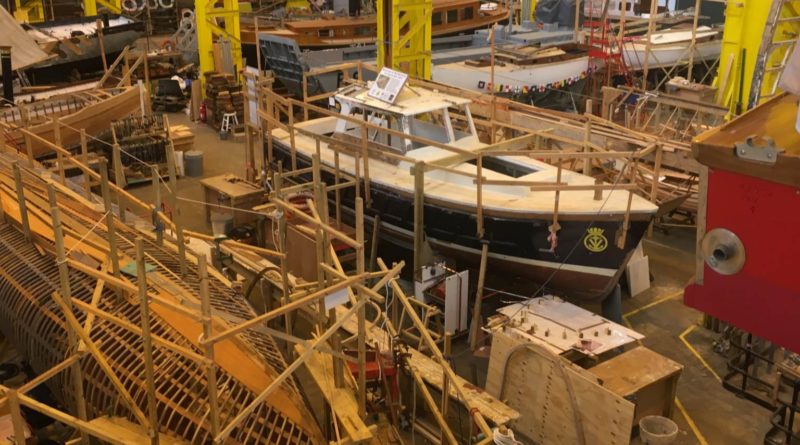 41 members had a very enjoyable tour of Boathouse 4 in the Historic Dockyard of Portsmouth. What a fascinating place. It is not so old and still features a ‘temporary wall’ from just after the war! It is now used to renovate and display historic boats, mostly from the Navy, but also to teach the skills of traditional boatbuilding. There are also a large number of volunteers who help with the restorations.

We saw many types of boats. There were small wooden boats that were being used to teach the different skills and techniques. Quite few steam driven boats – it seems that steam was used even quite recently due to a shortage of diesel engines. We saw ‘Osborne’ used as a tender for Queen Victoria. Quite few vessels in various stages of renovation. I think the victualling boat we saw needed 32 oarsmen to carry goods out to the Warships! We also saw a fully renovated landing craft that they intend to take to sea.

We were asked if the CYC members were comfortable to walk out on their new pontoons which got a bit of a chuckle.

The only challenge of the morning was that it was bitterly cold. However, after the tour we all had lunch in the Boathouse restaurant which was lovely and warm. Lots of friendly conversation which is one of the goals of the outing.

The Boathouse and the restaurant did us proud with such an organised approach. The Boathouse is a charity and the attendees donated £220 which will go directly towards the restoration of the boats in their care. Thank you.