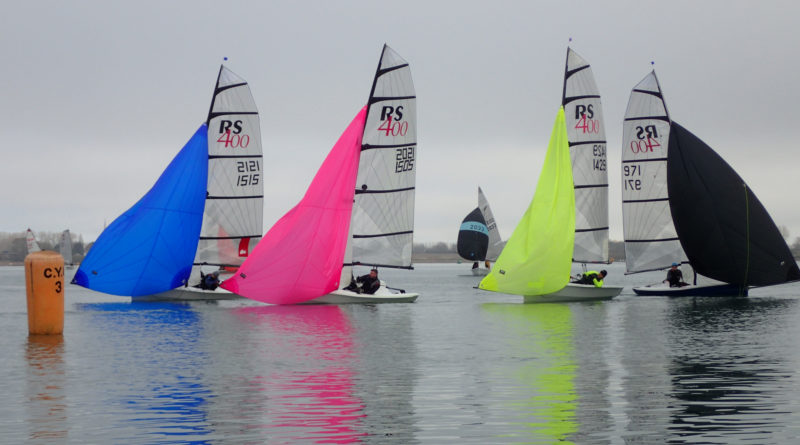 The finale of the frozen toe took place in very light winds. As the committee boat launched there was a bank of fog to the south of the club, the fog soon filled the lake area and for a time it was earily quiet sat in the middle of the race area unable to see anything in any direction. The Race officer, Chris Grosscurth, waited for the fog to clear before he released the fleets and coordinated the laying of the race marks. 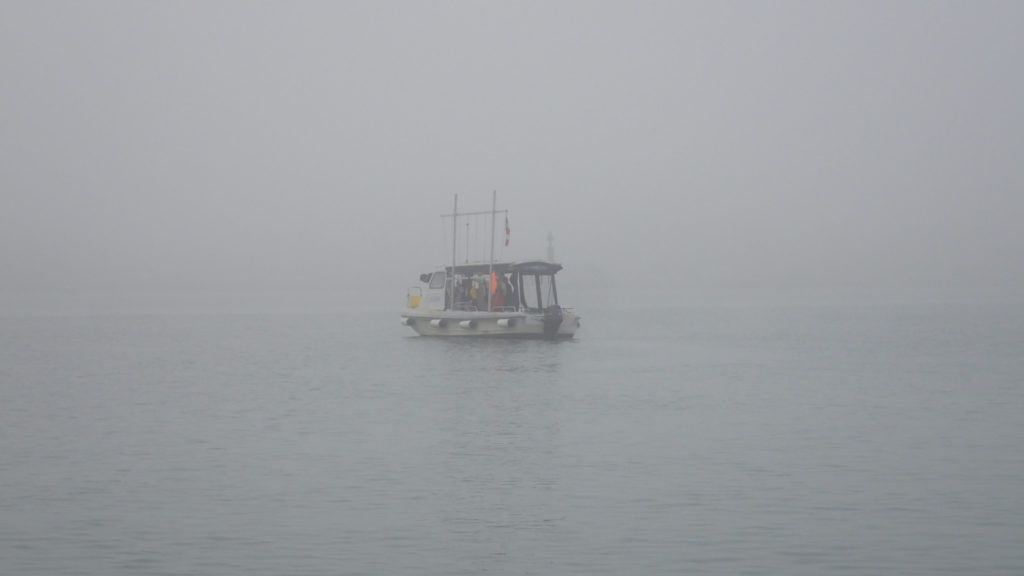 In the first race, the fast fleet were hit by a wind shift at the start which had many of the boats tack onto Port to cross the line. Steve and Sarah Cockerill led the fleet to the windward mark, but the downwind leg to mark 3 saw all the RS400’s trying to gybe together. As they approached the mark, Steve was forced to the outside of the line of boats unable to gybe until the inner boats gybed. Simon Kitchen and Abbie Hooper were the last boat to arrive, closest to the mark, and executing a neat gybe they emerged in front of all the others, with Steve now at the back of the bunch.

After another lap, with the wind dropping, Jack Holden and Jono Price finished first, Steve and Sarah Cockerill had climbed back to second place, and Simon Kitchen and Abbie Hooper finished third.

The Medium fleet pressed the line at the start, forcing one supernova over the line, having to sail back to start his race. At the end of the second lap, the race officer had to shorten the course as the leading medium fleet were struggling to make any progress in the light wind and the strengthening tide. The Winner of the race was CYC’s Lucy Boreham in her Europe, followed by Dell Quay’s Bill Dawber and Felpham’s Richard Bentley.

The slow fleet had 5 competitors, the race was won by Joshua James from Felpham, followed by Hazel Swain and James Davis from CYC.

The wind continued to weaken, so the Race Officer had no choice but to abandon racing and send the fleet home. Two visitors from Dell Quay were garteful to be towed home by the safety boat.

At the series prize giving, held outside the sloop, the Fast Fleet winners were Arun YC’s Jack Holden and Jono Price, followed by Lee-on-solent’s Neil Bevington and Alan Skeens in RS400’s then Trearddur Bay’s Ian Brooks in his Blaze. The Medium fleet was won by CYC’s Lucy Boreham sailing her Europe, followed by Dell Quay’s Mark Harper in his Solo then Felpham’s Andy Conway in his supernova. The slow fleet was won by Felpham’s Joshua James, followed by CYC’s James Davies then Lottie Cheeseman in 3rd place.

The Overall series was won by Lucy Boreham.

A prize was awarded to Emilia Davies, she had impressed the race committee. As a new competitor, she showed calmness and determination racing her Oppie in the challenging windy races earlier in the series.