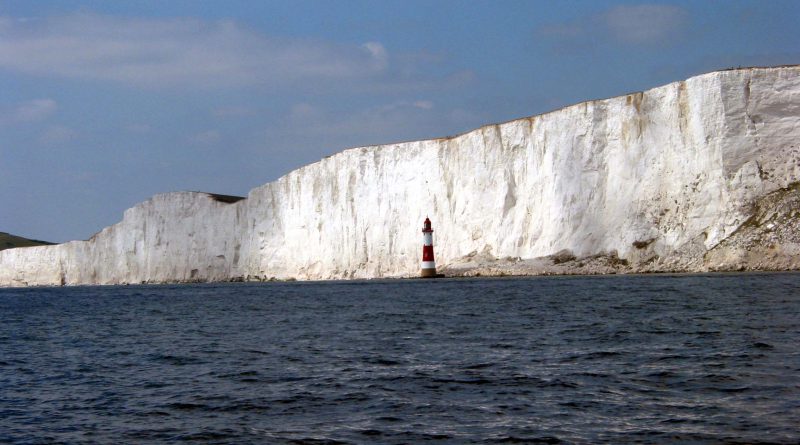 This looked like the perfect cruise for us, as we had long wanted to sail east to Brighton and Eastbourne, so to be able to do that in the company of other CYC members looked just perfect. We were not to be disappointed!

We left a day early to sail to Gosport, as the forecast for the 16th was pretty dire and proved right on the day with really heavy rain, which the other cruise members stoically battled through to arrive safely at the marina. The sun came out in the evening, to enable us all to enjoy a drink outside the Boat House café while we were given the cruise details, and I somehow ended up as deputy cruise leader!

A very early start on the 17th saw the sun come up behind the Spinnaker Tower on a very calm and almost windless morning, so we proceeded under engine. Off of Rustington, we had the excitement of being joined by a pod of bottle nosed dolphins which leapt and dived all around us. Sadly, they were not seen by all the cruise members, which was a shame as they are such a lovely sight.

We arrived outside Brighton Marina to find the wind gusting to 18 knots, and really huge waves. It was “rock and roll”, getting into the marina, and proved difficult getting safely into our berths in the gusting winds. The marina was very busy, with several large foreign flagged yachts coming in, which were all rafted up in one small area, effectively trapping some of our members in their berths. A pontoon party was held adjacent to Coco, before members dispersed to various marina restaurants.

Leaving the marina on the 18th was exciting to say the least! The massive waves were right on our beam, and felt as if they would roll the boat right over. We were all glad once we could get our sails up, and head off towards Eastbourne. Sailing along the seafront, we were greeted with a fly past of the Spitfire, Hurricane, and Lancaster of the Battle of Britain memorial flight that was taking part in the Eastbourne airshow. A very moving sight, and a truly fitting memorial to “the few”. We all went to the Sovereign Harbour Yacht Club for drinks in the evening, followed by dinner. We were all berthed in the North Basin, which is a very long walk from the local facilities!

The 19th was a lay day. Over dinner the night before, one of the cruise members (who shall remain nameless!), came up with a challenge to find unusual uses for the CYC rally banner, alias “the battle flag”. This led to members submitting lots of photo’s of the flag being used in various ingenious, (and literally quite cheeky!), ways. There would be a prize for the best entry. Sadly, due to the low cloud and poor visibility, the second day of the airshow was cancelled. A pop up pontoon party was held adjacent to Coco in the evening, and was much enjoyed by members who were able to attend.

The 20th was another lay day at Eastbourne, followed by the joint cruise dinner in the evening which was held at Pablo’s restaurant where the winner of the battle flag challenge was duly announced. The proud winner was Bob Spencer of Raven, for his brilliant picture of the CYC banner being flown from the top of Beachy Head lighthouse. He was suitably thrilled to be awarded his prize of a Premier Marina pennant, which had been retrieved from the deepest, darkest locker on Coco, and could have passed for an exhibit on the Antiques Roadshow. (Nautical artefacts section!) He duly flew it proudly from his flag halyard, while the rest of us pretended we didn’t know him!

Tuesday the 21st saw us all set off towards Brighton, enjoying a lovely sail in company past Beachy Head and the Seven Sisters, which were looking their best in the sunshine. Thankfully, it was much quieter at Brighton this time, which made for a much more pleasant stay.

Wednesday the 22nd saw us all leave Brighton for our final trip of the cruise. Flapjack, Good day sunshine, Ursa Minor and Resonate left us to return to their home berths, while the remaining four boats carried on to Gosport, unfortunately under engine again as the wind was on our nose all the way. Drinks were held on board Willow in the evening, before we all went to the Great Wall of China restaurant for dinner, which was a very fitting end to what had been a brilliant “Far East” cruise.

Our heartfelt thanks go to our wonderful cruise leaders Steve and Cathy Martin of Coco, whose kindness, warm welcome, and good humour ensured that this was a very successful and happy cruise enjoyed by all.