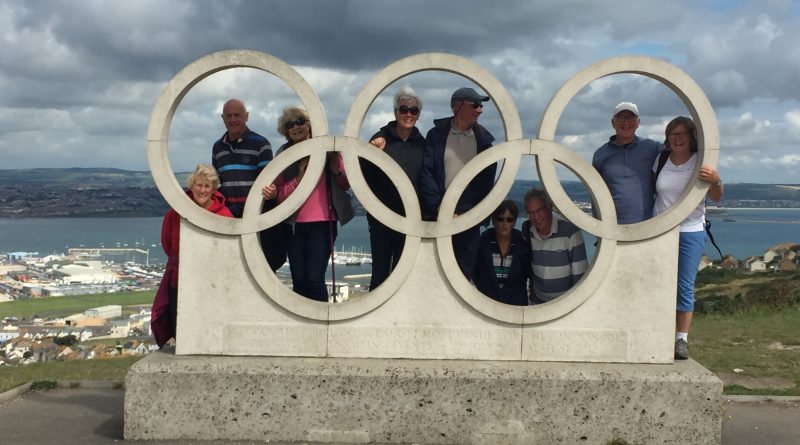 At the briefing it was decided to set out for Yarmouth on Saturday although the forecast was West 4/5 occasionally 6. So there were some doubts about whether we would all get there. Of the original 14 boats signed up, in the event only 9 started off and all did arrive at Yarmouth. This was in spite of dodging numerous racing fleets, it being the last day of Cowes Week, and dealing with a short lived squall 29 knots of wind with little visibility in a whiteout. We were fortunate to have berths booked at Harold Hayles since Yarmouth harbour was full at the beginning of Yarmouth week. After the statutory pontoon party we had a convivial meal at the Wheatsheaf.

The next day the forecast was for strong wind on the nose again. We left Yarmouth before 10am to get through Hurst before 400+ yachts sped past on their way to the Fastnet Rock. We had a good beat from Hurst to our anchorage in Studland Bay where we had a peaceful night at anchor.

The following morning we all motored to St Albans Head against the wind, taking the narrow inside passage which, as expected, was a bit choppy. From there we had a good sail to Weymouth. “Oar to Sail” and “Sea Bird” were there already having by passed Studland. “First Light” who had left a day later, also had an uncomfortable trip from Yarmouth but arrived in time for another pontoon party to celebrate our arrival. We had a lay day in Weymouth during which the able bodied took the bus to Portland Heights – we had great views of Portland Harbour where the 2012 Olympic sailing events were held. John and Jane led a walk to Portland Bill passing through old quarries where Portland stone had been carved into fascinating shapes by the general public.

The old “crocs” took the bus straight to Portland Bill where we all met for lunch at the Lobster Pot. During the stay in Weymouth the crews were invited to search for the answers to a quiz of anagrams and cryptic clues about the sights around the old harbour. In the evening we met for a meal at the Ship where the results of the Weymouth quiz were announced, the winners being the crew of “First light”.

On Wednesday we had another early start to catch the tide but we were rewarded with smooth seas and stiff winds as far as St Albans – great sailing! Fire Dragon had stayed in Poole for two nights and were at Poole Quay Boat Haven to take our lines. The rest of the day we relaxed and sheltered from the rain. 7am saw the fleet leave for the Solent. Spring tides and a north-west wind gave us a cracking sail with plenty of excitement, passing through Hurst narrows with sudden gusts of force 6/7.

We all managed to berth on the walk ashore pontoon at Gins Farm for our last night. Those of us who had CYC battle flags put them up, but Quintette had to retrieve their halyard by climbing up the mast.

A good meal was provided by Royal Southampton Yacht Club at Gins Farm followed by some tall stories and jokes. On Friday some left to return to Chichester whilst four boats remained to chill out for another day before joining the Marchwood cruise.

This was an ambitious cruise for seaworthy boats and hardy sailors due to the winds of force 5/6 most of the time, but everyone enjoyed the longer passages away from the Solent.
Boats taking part were: Dawn Chorus (leaders), Quintette, Oar to Sail, Akvavit, First Light, Bugsy 2, Avalon, Seabird and Fire Dragon.