On Friday evening, at the briefing, a lot of the discussion was about what to do if the pathetic winds in the forecast really did happen. In spite of that very pessimistic forecast, by the start on Saturday at 2.15pm there was a very nice 8 to 12 knot southerly to south-westerly wind blowing, and the odd spot of sunshine. As a consequence, the Saturday leg of our “Round the Island” provided a great sail down to Lymington.

With not too long to sort ourselves out in Lymington Yacht Haven, eventually nine crews met at the Town Sailing Club for drinks, a pretty excellent 3-course dinner, and to learn that Crayzee Feeling had won the first leg & thus, the Cuff Miller Trophy for this year.

After a relaxed start on Sunday (it wasn’t still dark, as has often been the case over the last few years), six stalwarts set off towards the south of the Island. The less good news was that conditions were grey and sometimes drizzling, but after a gentle motor down to Bridge Buoy to the revised starting point, there was plenty of wind to make for a really quick sail back to Chi.

On that pre-race motor-sail, I naively announced that Windreaver’s crew would be breakfasting on Bacon Rolls, which clearly caused some upset on Misty Blue! So I can only thank Crayzee Feeling, who volunteered to supply their “extra” pack of bacon to Misty Blue. In a manoeuvre worthy of a Royal Fleet Auxiliary supply ship – they lobbed it across, once the yachts were roughly alongside… (apologies if I have traduced the RFA – for journalistic effect)

Suitably fortified, Simon Benson (Misty Blue) won the return leg, & the Harding Trophy! But if ever there was a demonstration of what a difference a cleaned and newly painted bottom (of the boat) could have, I think this is it. Congratulations Simon!

That did not stop Steve Cray (Crayzee Feeling) who came 2nd on the return, as well as winning the Cuff Miller for the outward leg & therefore won the RTI Trophy. Well done Steve & crew! But who will stop Crayzee Feeling from winning Race Skipper again this year?

Many thanks to all who participated in this Race/Cruise. As always, your company & enthusiasm make the organising all worthwhile. And a special thanks to the Higginsons (Akvavit) who kindly held the fort for us at the Town Sailing Club – who were fretting a bit when we didn’t turn up exactly on time.

Next up is the Bramidge Trophy on 7th September. We really need your support for this one-day bay race against CCRC, so please sign up – if you haven’t already. 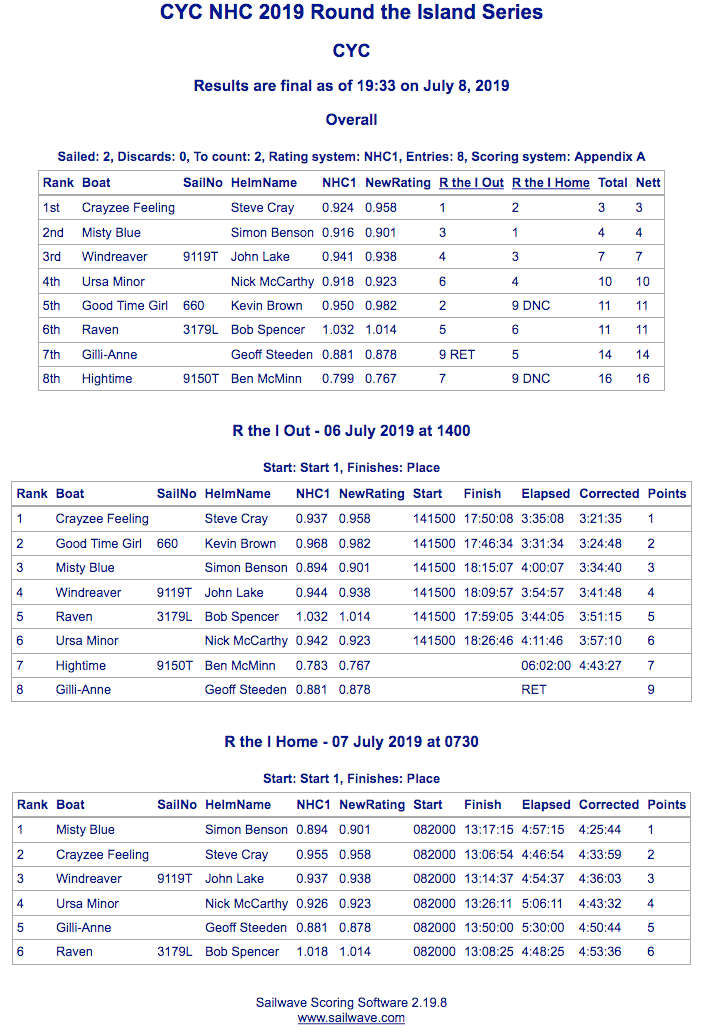