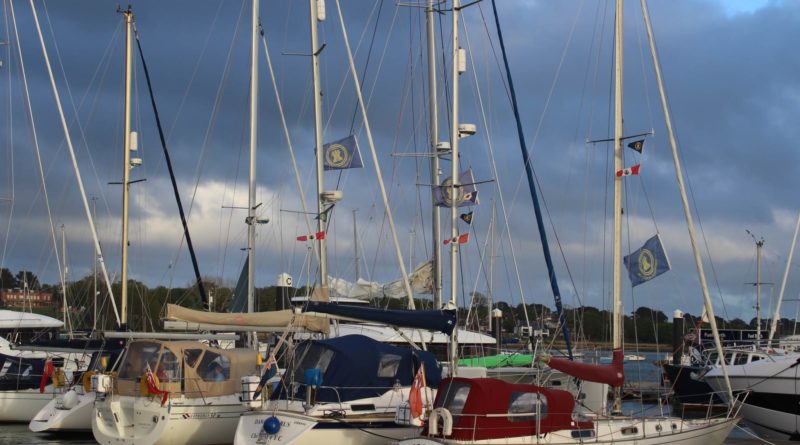 With strong winds forecast over the weekend and for the start of the cruise on Monday and the following Friday, we hastily rearranged the programme to go straight to Port Hamble on Tuesday May 11th for a shorter 2-night cruise. No-one fancied a beat in F6 to the other end of the Solent.

Most boats had a fabulous sail to the Hamble in the sunshine, arriving around lunchtime at slack tide, but unfortunately Aquadisiac had to turn back at West Pole due to engine failure.

This was the first trip out on the boat in a long while for some and for others it was their first cruise in company this year and they wasted no time in catching up with old and new friends. Later everyone reassembled in groups of 4 or 6 for cockpit ‘pontoon’ parties.

Despite heavy overnight showers 21 people joined a socially distanced walk along the Hamble River via Bursledon and Lower Swanwick, returning to Hamble-le-Rice by the pink ferry. Later everyone met in groups of 6 for tea and cake in cockpits and then in different groups for a meal outside under heaters and blankets at the Banana Wharf on the marina.

A few boats, including us, returned to home ports on Thursday morning motoring into the wind in very lumpy seas. The rest made the right decision to stay another day and enjoyed good northerlies for another lovely sail back.

Though more difficult and less spontaneous with the restrictions, everyone enjoyed socialising and being on the water again.

Thanks to our deputies on Topsy and to Aquadisiac, Avalon, Bugsy 2, Cobweb, Coco, Dancing Deva, Dawn Chorus, Good Day Sunshine, Quintette, Rascallion and Sounio for a great cruise.