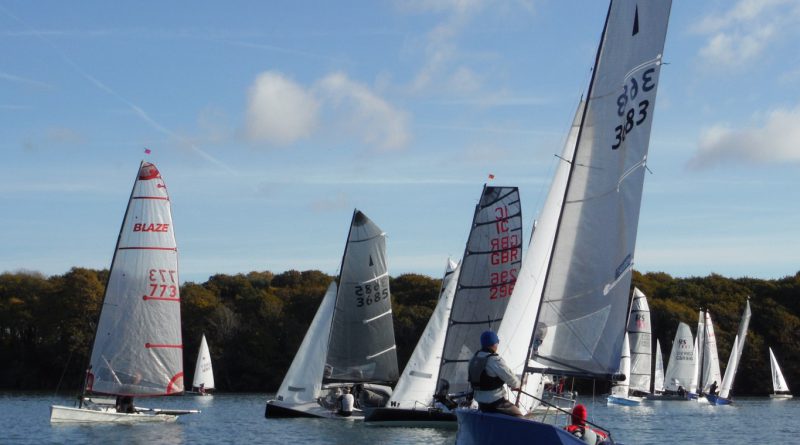 It was an early start for frozen toe 2&3, with a number of competitors feeling the lack of sleep after last nights dinghy prize giving. The promised fresh breeze from the North was notably absent as we looked out at a beautiful sunny morning, without a breath of wind. The race officer, Derek Jackman, and his volunteer crew from the CYC Solo fleet supported by Felpham’s Guy and Alex Mayger, prepared a W shaped course to maximise the use of the lake, but had to postpone the start while everyone waited for the wind to set in.

When the racing got underway, it was clear that the wind was appearing in fingers across the lake, those in the wind got away, while those only a few feet away were left standing. The W course had people searching for the next mark, the low winter sun made it quite difficult to spot some marks and a couple of competitors ended up having to back track to sail the correct course. Another competitor had a coming together with one of the chichester marina starboard channel posts which tore his sail, but didn’t stop him completing race. In the light wind, the first race was shortened to one lap. The Merlin Rocket helmed by Alex Jackson made the best of the conditions to win the fast fleet. In the Medium fleet Ian Brooks from Trearddurr  Bay took the flag first, while Jo Andrews lead the slow fleet.

The wind filled in a little for the second race of the day allowing two laps to be sailed in the race time. The winner of the Fast fleet was helmed by Sophie Mackley in her Merlin Rocket. The Medium fleet was won by Nick and Biddy Colbourne in their GP14, while Joe Andrews maintained her 100% record in the slow fleet.

As the fleet packed away, the wind continued to build to a nice 15-17knots, but by then the tide was receding.

The Next frozen toe is on the 27th November, another early start!

Full results and more photos can be found here on the CYC website.