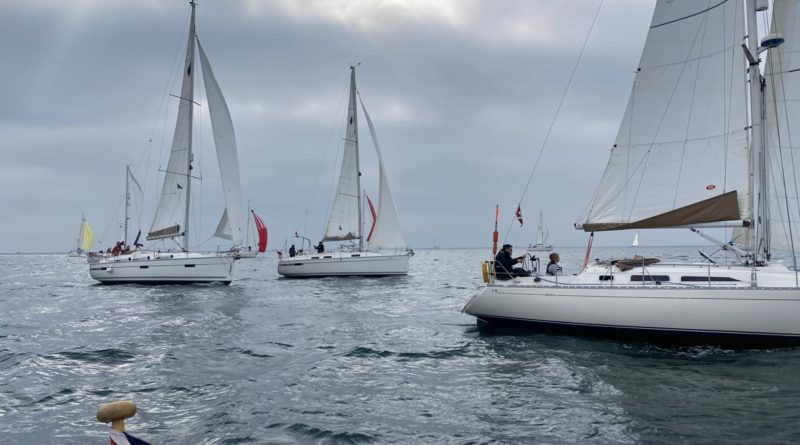 Our annual race to Yarmouth is always one of the highlights of the race calendar and people yarn about certain boat’s past indiscretions in watering holes the length of the Solent. By this I mean we all take every opportunity to remind our own dear RC Yachts of the time he missed one of his own marks in full view of the fleet. This year with 18 boats making it to the start line on Saturday morning, we were in for a good weekend.

Having done this job for a year now, I’ve become quite a superstitious soul. Like the sailors of old who never set sail on a Friday for fear of condemning the whole operation, I never mention the weather until absolutely necessary. For the week leading up to the race I could not believe the weather forecast being dished up by the boffins at the Met Office – an easterly wind, the holy grail for all Chichester based Solent sailors. As is our lot in life, the devil has to be paid at some point, but that was a problem for another day.

The course for Saturday was a straight blast down the Solent, with a few marks thrown in to make everyone who had brassed up for the laminated Solent Racing Marks Chart feel better about their investment. The day dawned slightly grey with the promise of sun as things got going. The easterly wind was there, joined by a bit of northerly, but neither of them were troubling themselves too greatly.

We had some new recruits in the fleet this year with Paul and Dawn joining us on Grace, and it was also excellent to see the return of some old faces who had not been able to join us all season. The start was a fantastic sight with our real mixture of boats and sizes all jostling for the best position on the line. Twenty footers were making forty footers give way, whilst us on the committee boat were trying to ensure we did not gain an extra through hull by being rammed by somebody’s bowsprit.

With a downwind start, most boats opted to ensure maximum manoeuvrability by starting under white sails but some did not (you know who you are!). No sooner had the race settled in than a flurry of foredeck activity resulted in an explosion of colour as spinnakers and cruising chutes were set. Given the marginal wind, this did not really result in much extra speed, but it looked very pretty. The crew on Tern IV, obviously not content with their performance thus far this season and concerned by the number of boats they could still see around them, deployed a hitherto unseen spinnaker, and set off in pursuit of Cool Runnings who was already disappearing into the middle distance.

The course allowed for a bit of a tactical quandary, the shortest route being through the small boats channel which a breakaway group, led by Kerenza with Misty Blue, Serendipity and Lowenna in hot pursuit, opted for. The rest of us thought the route between the forts might deliver a better tide and wind angle, so we pressed on.

On board Aquadisiac all was peace and harmony, until spurred on by Anne, Nick decided now was the time to get the cruising chute out for the first time. After a bit of inevitable faffing, they were rewarded by a 6th gear and started pulling away from the rest of us, despite a dastardly move by Muddy Waters, rounding up and heading straight for them as they came steaming past. A valiant effort, if not totally planned, but it did not slow Aquadisiac for a second. First Light also decided that they had tired of the conversation between the afterguard and there was more rewarding chat amongst the leading boats, so they found some wind and sped off. This left the rest of us slowly floating down the Solent, mainly carried by the tide but with full sails so it looked as if we were trying.
When we reached Cowes the crews on board Misty Blue and About Time decided that their allocated sailing time had been expended and ‘refreshment’ time was in jeopardy, so on went the motors. On rounding the second mark the breakaway group were reintroduced to the rest of the fleet with some success as we all then went direct to Yarmouth.

Grace, Cool Runnings, Serendipity, Crayzee Feeling, Aquadisiac, Kerenza and Tern IV made the best of a steady 10knot breeze down the channel. Unfortunately, they took the breeze with them leaving the rest of us whistling for a wind. Stormcruiser, after a few sail changes, found their groove and started pulling away leaving Muddy Waters, Good Day Sunshine, Lowenna, Windreaver and Elyse all within a quarter of a mile of each other competing on who could float the fastest whilst seeing Merlot and Star Dancer coming up behind us. At the front the battle of David and Goliath came to a close finish with Cool Runnings narrowly beating Tern IV over the line by 12 seconds. That is almost 1 second for every foot of difference in waterline length between them. Don’t worry Peter, at least your crew weren’t thirsty 😉.

Yarmouth Harbour did a great job of rafting us all together and with all the boats safely moored up the harbour was awash with CYC flags. The harbour was not the only thing awash, during the pontoon party we successfully managed to sink the pontoon under the weight of people. Sodden socked, the group assembled for the results announcement. True to form Tern IV took the top spot, followed by Cool Runnings in second, Serendipity in third and First Light fourth. Further down the fleet there were some great results with Aquadisiac and Lowenna coming in sixth and seventh, just 12 minutes off a podium position. Fantastic results given the tricky conditions.
The group then retired to the Wheatsheaf for dinner. That night the residents of Yarmouth were greeted with a display of multi-coloured mast lighting, as some of the CYC yachts, inspired by Cool Runnings, illuminated their masts with coloured light.

The saying “Time and tide wait for no sailor” could not be truer the next day, however, I would also like to add it waits for no coffee or bacon sandwiches either! To make the best of the easterly flowing tide the next morning the fleet had to set alarms for 05:00 to unraft ourselves and make the start line for a 06:30 start. The crew on Cool Runnings awoke to find that some clandestine terrorists had renamed their boat to T/T to Grace, Grace having taken the crown of biggest boat in the fleet with her 54 feet. This was reinforced by Grace leaving her fenders down as she exited the harbour to allow her new tender to pull alongside and deliver the morning papers.

To compensate for making us leave our comfortable bunks before the sun was up, Mother Nature delivered the goods with the most amazing sunrise and a lovely steady 10 knot breeze from the northwest. With the fleet all beating to windward there followed a beautifully peaceful morning punctuated by shouts of “Starboard!” as boats battled with each other tack for tack. With a 2 knot tide spurring us along we made Cowes in short order. Here, however, the wind decided it had had enough and was going to take the rest of the day off. What followed was a glassy smooth, tide powered, floating race, and amongst the fleet boat crews were seen climbing the rigging to try and spot a breeze. Again, Aquadisiac found her stride slowly overhauling Windreaver and Elyse, passing us less than a hundred yards away whilst we sat there becalmed and considering what we had on board we could offer to Boreas as a sacrifice for a favourable wind.

After an hour, it was clear the wind was not returning so I shortened the course to hopefully allow all boats to finish before the tide turned foul. Most boats made it, although the ones at the back had a real battle on their hands as the tide mellowed. Again, Tern IV took the rosette for first place, followed a minute later by Aquadisiac and 30 seconds later by Cool Runnings. Stormcruiser improved their standing on day two with a fourth, Kerenza fifth and Grace sixth.

Congratulations to the lead boats but also many congratulations to the boats at the rear of the fleet who sailed well and had some great results even though they had less favourable tides. That’s it for racing until next year. Thank you all for coming and being such amazing company and sports. Hopefully next year the handicap system will let the rest of us have a Tern on the podium 😉.