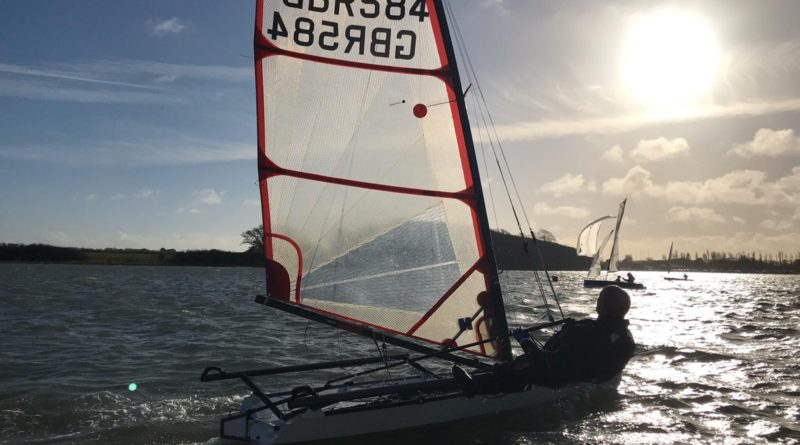 The Race officer was carefully monitoring the wind strength in the run up to the first Snowflake of 2020. The forecast had strong winds (20 gusting 30) forecast to drop in the middle of the day to 15 gusting 20. As the competitors arrived the wind was still toward the top of the range, but perhaps surprisingly the weather actually did what it was supposed to allowing both races to go ahead with the added bonus of bright blue skies.

The Race officer, Phil Allen, set a P shaped course with a long beat toward Birdham and a fast reach across to Monkey. The Gybe at Monkey was tricky and caught out a few of the crews in the gusty wind. The course then took them back to the centre of the lake, gybing again with a run down to the final turning mark near Marina.

There was some very close, fast racing for the leading groups in the fast and medium handicaps with only seconds separating then in both races.

In the fast fleet, 7 RS400’s helped to make up a fleet of 14, however, in both races it was the Merlin Rocket of Ben and Roz McGrane that took the honors followed home by Steve and Sarah Cockerill.

In the 17 strong medium fleet, the results were more varied. In race 1, Mark Riddington finished first in his RS Aero 7 followed by Iain and Sarah Yardley in their 2000. Race 2 saw Iain and Sarah take the win followed by CYC’s Charlie Elliot and Will Dodd also sailing a 2000.

The 4 boat Slow fleet saw a win for Martin and Henry Jones in their Mirror in race 1. Race 2 took place without the Mirror, allowing CYC’s Thomas Machell to take the win and secure a series lead after two races.

All in all, it was an excellent start to the new year!

The Next Snowflake at CYC is on the 26th January (11am start).