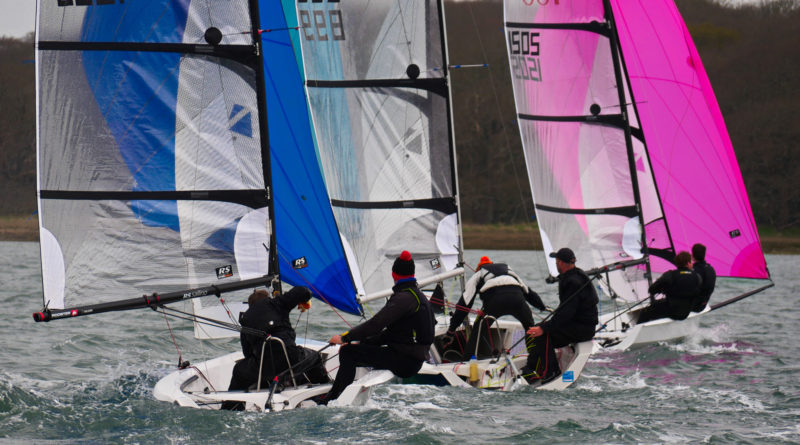 CYC’s first open event of 2021 took place on a particularly cold Saturday morning. The Northerly wind was biting as the 18 competitor boats arrived at the club.

CYC had taken many precautions to minimise covid risks to the volunteers and competitors. The normally hectic registration and briefing in the sloop was replaced by calm socially distanced preparations. The Race officer, Nick Colbourne, had recorded a competitor briefing and published it to YouTube and WhatsApp was used to communicate the course. The Competitors arrived and prepared thier boats in the carpark, with lots of chatter between the competitors who were obviously pleased to see one another after the months of lockdown.

The race officer setup a windward leeward course with the committee boat start line close to the marina channel and the windward mark and spreader toward coperas point. The leward gate was adjusted carefully to remove any bias.

Race one was against a strong flooding tide, Ian Walker got a flying start from the Pin end and led for much of the beat, but it was Jack Holden that reached the windward mark first, closely followed by Ian and then Nick Craig.  As the race continued the leading boats were very closely matched, Jack led the fleet for the first few laps with Nick and then Ian closely following, but after four laps Nick Craig emerged as the leader.

Race two saw the competitors pushing for the line leading to two general recalls before they were eventually able to get away. Once again Ian Walker got a great start taking his favoured pin end of the line, the fleet all raced toward the Marina side of the channel to avoid any effects of the tide and to make the most of the stronger winds on the east side of the course.  By the time the fleet reached the top of the course Jack Holden and Robert Henderson had taken the lead, Steve and Sarah Cockerill just held off Nick Craig and Toby Lewis in second, but by the time the boats had passed the spreader and hoisted thier spinnakers, Nick had established a slight lead over Steve and was chasing down Jack Holden. The close racing continued for the next few laps, with Nick catching and eventually overtaking Jack to take a second win.

In Race Three, the fleet got away cleanly and headed directly for the slower moving water out of the ebbing tide. This time Nick Craig and Toby Lewis got the best start, timing their approach to the line to perfection and led the fleet with Ian Walker in close pursuit. The fleet tacked in a narrow band hugging the east shore of the harbour. Soon the leading quartette of Craig, Walker, Cockerill and Holden emerged at the head of the fleet, but this time Nick was the first to the windward mark and started to build a lead over the other boats. On one lap Nick Craig and Steve Cockerill both chose to gybe immediately at the windward marks, choosing the east side of the course for the downwind leg, this was clearly a good decision as they both extended thier leads from Jack Holden and Ian Walker who chose the centre of the course and the strong tide to carry them south.

After the three races, Nick Craig and Toby Lewis won the series with three wins. Jack Holden and Robert Henderson took second with two second places. Steve and Sarah Cockerill took third with an improving series of 4,3,2. Ian and Emmy Walker finished fourth, followed by Sam Pickering and Emily Heath who had a very consistent series with three fifth places.

After the racers came ashore, the prize giving was held outside on the steps of the sloop, bottles of wine were presented by Chris Grosscurth, CYC’s racing sec and one of the chief organisers of the event. Nick Craig thanked CYC and especially Nick Colbourne for running an excellent race series. 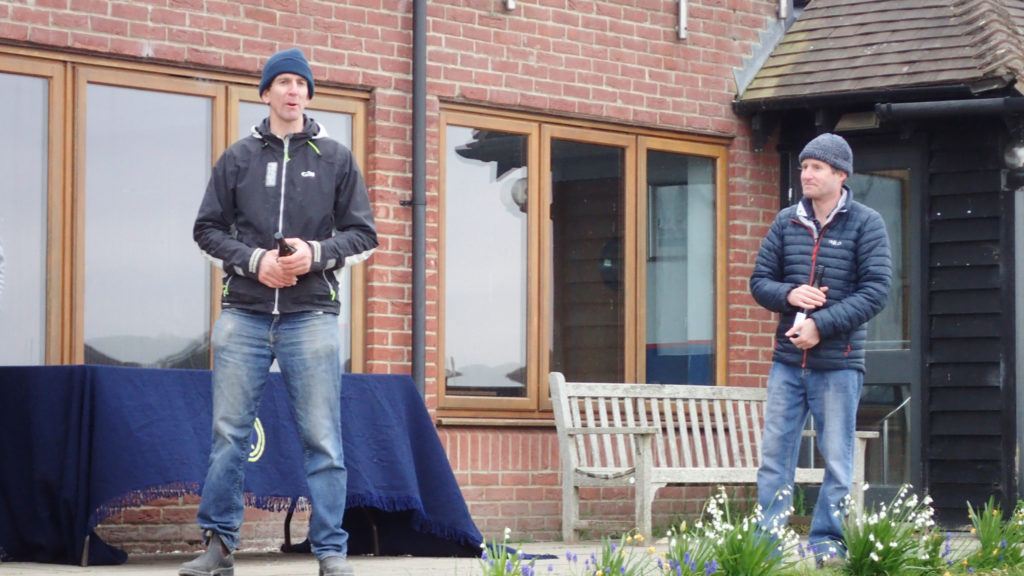 Full results and Many more photographs are available here on the CYC website.

The next open meeting at CYC is the Optimist Open on the 1st of May. Competitor numbers will be limited, and sadly there will not be a regatta fleet race this year as the club takes steps to reduce the number of volunteers needed to host the event, and reduce any congestion in and around the club.